17 April, Kyiv, NSC Olimpiyskiy, 19:30 Match build-up Shakhtar prepared for the encounter with the table leaders Dynamo through a weekly cycle: the team held a sufficient number of theory sessions and worked out everything they needed on the pitch. Special attention in training was paid to set-pieces. In the recent April matches, Luis Castro's team beat Vorskla 2-0 and Mariupol 3-0, with Shakhtar forward Junior Moraes scoring a double. It would be nice for him to extend this winning streak in the meeting with his former club, especially as Junior scored goals against Dynamo this season both in the Super Cup and in the league’s stage one (those were first-half headers on both occasions). Opponents Dynamo captain Serhii Sydorchuk will not appear in the clash after earning his fourth yellow card against Dnipro-1. In that match, Mircea Lucescu's men secured a 2-0 win, with their winning streak involving six rounds now (vs Lviv, Minaj, Zorya, Rukh, Oleksandriia, Dnipro-1) ... In case of a positive outcome in the encounter with Shakhtar, the Kyiv side will maximally simplify their task of winning gold medals, while in the event of defeat the gap will reduce to four points. Head-to-head record In total, the opponents had 66 league meetings: Shakhtar won 25 times, Dynamo won on 24 occasions, alongside 17 draws. The aggregate goal difference is 82–81 in favour of the Miners. Previous meeting On November 8, Dynamo hosted Shakhtar at the same stadium and were thrashed 0-3. Immediately after Sydorchuk's narrow attempt, the Miners bagged a goal: Moraes headed the ball into the back of the net after Dodo's delivery. Just before the half-time whistle, Sydorchuk left his team with only ten men remaining after bringing down Korniienko. In the second half, Stepanenko and Marcos shared the second goal, with Patrick sealing the win by his spectacular shot to the right corner. 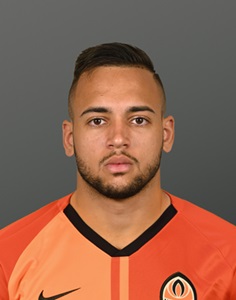