September 11, Kyiv, NSC Olimpiyskiy, 19:30 Match build-up Shakhtar have lost points in the league twice this season. In the 3rd round, they suffered a defeat at the hands of Oleksandriia, and in the 6th round, before the international break, they were tied by Minaj. Due to this fact, Dynamo (who, in turn, failed to claim maximum points vs Inhulets) are currently three points adrift of the Orange-and-Blacks. For more than a week, Roberto De Zerbi had to do without the internationals. The Miners did not have any friendlies. The team trained with a limited number of players who, when necessary, were joined by U19 players. Meanwhile, Valerii Bondar and Pedrinho returned to the general group. A few days before the match vs Dnipro-1, Pyatov, Matviienko, Stepanenko, Sudakov, Mudryk and Bondarenko returning to the club camp, with the rest of players arriving a little later. Yukhym Konoplia who was called up by the national team for a friendly against the Czechs, did not come on as a substitute. Let us remind you that Marlon and Dodo will not play against Dnipro-1: both of them earned red cards in the duel with Minaj. 22 players are preparing for the match: goalkeepers: Pyatov, Shevchenko, Puzankov; defenders: Konoplia, Bondar, Vitao, Matviienko, Ismaily, Korniienko; midfielders: Stepanenko, Maycon, Marcos Antonio, Alan Patrick, Marlos, Tete, Solomon, Mudryk, Sudakov, Pedrinho; forwards: Traore, Sikan, Fernando. Children under 14 will enjoy free admission to the Olimpiyskiy for the Shakhtar vs Dnipro-1 match! Learn the details. Opponents Dnipro-1 successfully started the new season, losing just once to Desna in six rounds. Igor Jovicevic’s men tied with Vorskla (2-2), and won against Chornomorets (3: 0), also defeating Mariupol (2-1), Rukh (2-0) and Metalist 1925 (1-2). That is, in every game that saw the Dnipro-based side claiming points, they scored at least two goals. Currently, the team sit side by side with Shakhtar in the table, having the same number of points, wins, draws and defeats, having scored the same number of goals (12), but having conceded two goals more (6). In the summer, Shakhtar Academy graduate Oleksandr Pikhalyonok moved to Dnipro-1. He managed to score a goal against Chornomorets in the 2nd round, and in the 4th round vs Desna he was sent off, earned a two-match suspension and served it. The footballer has every chance of taking the field against his home club. Meanwhile, Danyil Ihnatenko plays for Dnipro-1 on loan. The team also have Vladyslav Dubynchak, Mykyta Kravchenko and Nazarii Rusin who were loaned out by Dynamo. Head-to-head record Shakhtar won 4 out of 4 matches against Dnipro-1 with a total goal difference of 9-2. The score has never been the same (2-0, 4-1, 1-0 and 2-1). Previous league meeting On May 1st, Shakhtar won 2-1 at the same arena. Dentinho and Tete scored in the first half after two mistakes by the opponents, and Oleksii Khoblenko scored one for the visitors in the 90+4 minutes. 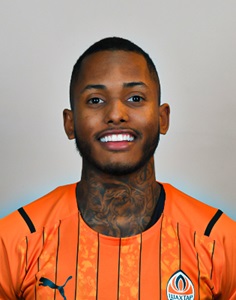