August 10, Kyiv, NSC Olimpiyskiy, 20:30 Match build-up A week ago in Genk, Shakhtar conceded the opener after a precision header by Paul Onuachu and left for the break losing 0-1, but in the second half they managed to turn the outcome in their favour. In the 63rd minute, Tete converted a penalty awarded for a foul on Pedrinho. And in the 81st minute, after Marlos's signature delivery, Ismaily jumped out from behind Muñoz and volleyed it to the far post where Alan Patrick flicked it home. Between the two encounters with Genk, the team suffered the first defeat by losing 1-2 to Oleksandriia in a league game. This happened after three straight victories at the start of the season. Roberto De Zerbi stressed several times that the players should immediately learn lessons from the defeat, primarily in mental terms, giving their maximum on the field and improving efficiency. This is the only way that can lead to the desired results in the Ukrainian league and the Champions League. 24 footballers are preparing for the game: goalkeepers: Shevchenko, Pyatov, Trubin; defenders: Dodo, Vitao, Kryvtsov, Marlon, Matviienko, Konoplia, Ismaily, Korniienko; midfielders: Stepanenko, Maycon, Marcos Antonio, Marlos, Tete, Mudryk, Alan Patrick, Sudakov, Pedrinho, Konoplyanka; forwards: Dentinho, Traore, Sikan. All the fans wishing to support Shakhtar can still purchase tickets for the match. They are priced from UAH 70. Opponents In the first leg, Genk proved to be very dangerous opponents capable of causing a lot of difficulties in every third. The Belgians who arrived in Kyiv yesterday, are serious about continuing to compete in the Champions League. Saturday's victory over Kortrijk gave optimism and confidence to John van den Brom's charges as this has been the side’s first win in five matches this season. By the way, in each of them Genk scored at least a goal and never suffered more than a narrow defeat. Genk fielded the following line-up against Kortrijk: Vandevoordt, Muñoz, Cuesta, Mackenzie (Lucumi, 65’), Arteaga, Heynen, Eiting, Ito (Tresor, 46’), Thorstvedt, Bongonda, Onuachu (Dessers, 87’). Genk were 0-1 down, but ultimately they won thanks to two identical corners by Mike Tresor, while Paul Onuachu (header) and Daniel Muñoz (footer) scored the goals. 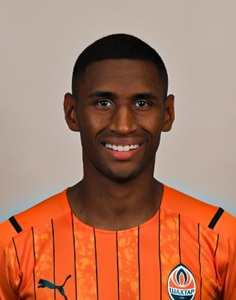