U21. Shakhtar vs Stal: preview

In the 17th round of the Ukrainian U21 league, Shakhtar are receiving Stal. We bring you the match preview

December 3, Schaslyve, Knyazha Arena stadium, 13:00
Before the match
The Pitmen continue their title race vs Dynamo: in 10 days’ time, the opponents will have a head-to-head meeting, having a three-point gap between them so far. In the most recent round, Shakhtar claimed a major win vs Dnipro (4-1). Giorgi Arabidze grabbed a brace and produced one assist, with central defenders Danylo Sahutkin and Taras Kacharaba netting one goal each. At the same time, the coaching staff of Shakhtar began testing young football players in action, with 17-year-old Viktor Korniienko debuting for Shakhtar U21.
Referee – Yevhen Aranovskyi (Kyiv) Assistant referees – Taras Klymenko, Maksym Chos (both from Kyiv) Fourth official – Denys Shurman (Kyiv Oblast) Referee observer – Viktor Shvetsov (Odesa)
Opponents
Stal sit in the 8th spot in the table, being two points adrift of the top six sides. After 17 rounds, Kamenske-based team have 4 wins, 6 draws and 7 defeats (18 points, goal difference of 24-29). At the same time, early this season, the Steelworkers produced an unbeaten run including a unique victory over Volyn (9-0) and a stalemate vs Dynamo (1-1).
In the previous round, the charges of Yeghishe Melikyan shared the points with Vorskla (1-1). Stal’s top scorer Yurii Klimchuk opened the scoring, with the goal being his eighth this season. 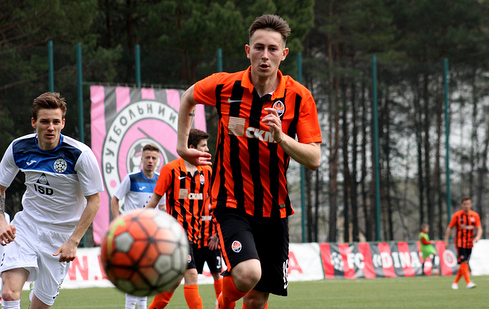