Shakhtar vs Schalke: tickets go on sale on January 18

Dear fans, On January 18, Arena Lviv will start selling tickets for the Shakhtar vs Schalke 04 game. We want to remind you that this match will be held as part of the Europa League Round of 32 in Lviv, at 22:05 on February 18.

Ticket sales will be carried out in several stages. Traditionally, the fans who regularly attend matches of Shakhtar in the Ukrainian League and the Champions League will have priority to purchase them. We bring you the prices and the sales stages.

- 18/01 – tickets can be purchased by the holders of the Arena Lviv fan cards and by the fans who attended the domestic league matches this season. Simultaneously, the official website of Shakhtar will start the online sales for those football fans who have purchased tickets online for the Pitmen’s games in the Ukrainian League in the current season;

Please note! Each registered fans will receive a text message with a special code. To purchase a ticket, they will need to produce their ID and the SMS-code at the Arena Lviv ticket office. The users of the online service will have access to the website in the corresponding period of sales.

In the second stage, the tickets will be available at retail outlets in Lviv:

If vacant seats remain in the stadium after the first two stages, they will launch Stage 3. Please note that ticket prices at this stage will be higher than those at the previous two stages. We will announce the possible Stage 3 later.

One fan will be able to buy a maximum of four tickets!

Holders of the Donbass Arena season tickets for the last 6 seasons can purchase one ticket of any category at 30% off. To do so, a fan is required to send the series and the number of their season ticket (if they cannot send the series and the number of their season ticket, is will be sufficient to email their full name, the season in which they had a season ticket, and their mobile phone number) to zayavka@shakhtar.com or contact the call centre at (062) 388 88 83. The season ticket holders of the Club 1936, Business Club and Diamond Club can use a dedicated phone line (067) 620 14 59 or (050) 420 20 17. We will book tickets for them. They can pick the passes at the Arena Lviv ticket office daily from 10:00 until 20:00 and on the match day from 10:00 until 17:00. Make sure to bring an ID.

Ticket office of the Arena Lviv stadium is open from 10:00 to 20:00 without breaks and days-off. Please note: on holidays and weekends the ticket office opening hours remains unchanged!

You also have the opportunity to purchase a corporate box for the Shakhtar vs Schalke game. You can book a place in a box or the entire box by following this link and get more information about VIP-tickets for the corporate boxes by calling at (067) 620 40 11. 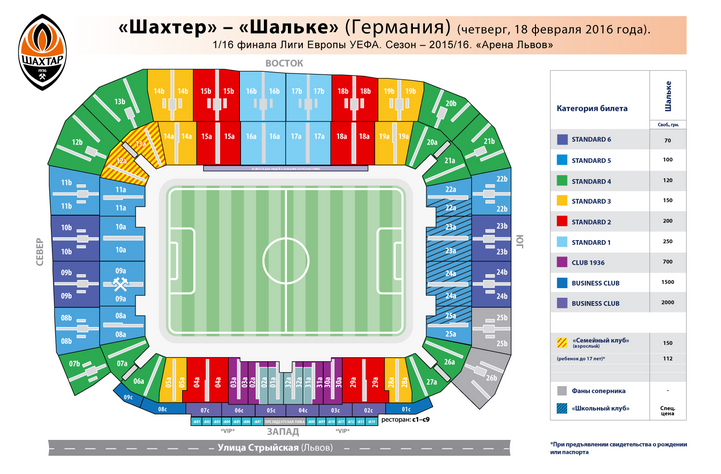