In the major game of the UPL round 3, Shakhtar defeated Dynamo in Kyiv

The spectacular goals by Junior Moraes and Marlos brought the champions a 2-1 victory.

The Miners put an end to Dynamo’s unbeaten UPL run that involved 18 games (the previous defeat took place in Oleksandriia on November 25). In his Clasico debut at Dynamo’s stadium, Luis Castro’s outfit emerged victorious. Before that, Shakhtar failed to beat the team of Oleksandr Khatskevych away on four occasions. For the Orange-and-Blacks this is the 8th Ukrainian League victory on Dynamo’s pitch.

Shakhtar scored the same number of away goals vs Dynamo as the Kyiv side did vs the Miners at the latter’s ground (31 each).

Early in the second half, the Orange-and-Blacks had a peak superiority in ball control: 79% vs 21% from the 46th to the 60th minute. Shakhtar’s average possession figure is 62%. Shakhtar produced more shots from the penalty area (7 attempts vs 4), Dynamo made more attempts from outside the penalty area (4/6).

For the second season in a row, Junior Moraes has scored a goal against his former club with the matching ending 2-1 in favour of the Miners. He also excelled in April in the Cup Clasico. 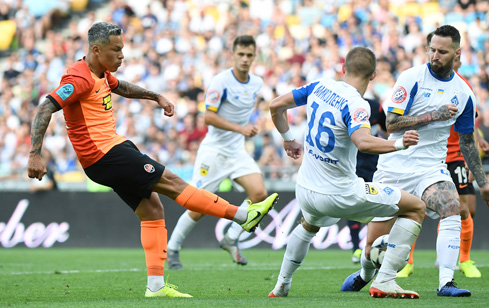 Marlos was voted Man of the Match
Challenges and defence

Alan Patrick won the most individual challenges (13). Matviienko turned out to be the most involved for the number of completed passes (31 forward passes, including 23 advancing ones); he, along with Stepanenko, also intercepted the ball most often (6 times each). Serhii Kryvtsov delivered a great performance by winning 80% of challenges and making 5 clearances. Taras Stepanenko is the best player for the number of rebounds in total (10) and in the opponents’ half (5).

Solomon provided Moraes with an assist, having beaten Mikolenko in a one-on-one challenge. 67% of Manor’s dribbles in the reporting encounter proved successful. Also, the Israel national team’s midfielder took a few set-pieces by delivering 3 corners and taking a free-kick.

Marlos scored his 58th goal and made it past Eduardo on Shakhtar’s all-time top scorers list. The next goal will allow the midfielder to get level with Facundo Ferreyra who sits bottom of the club's top 15 goalscorers list.