In the league round 10, Shakhtar defeated Dnipro-1 away

Shakhtar won the recent 4 games at the Dnipro Arena with the same score of 2-0. This streak began in November 2016 in a championship match vs Dnipro. Then, at this stadium, the Orange-and-Blacks defeated Dynamo in the Cup final (2018) and beat Dnipro-1 in the Cup semi-final (2019).

Luis Castro’s men possessed the ball for 60% of the time, winning 54% of attacking challenges and taking 16 shots (6 on target), with 10 of them coming from outside the penalty area.

The Miners have been enjoying an unbeaten run 10 points clear of the pursuers, having claimed 10 victories in 10 rounds. The 2012/13 season record remains unbeaten - Shakhtar began that league season with 15 straight wins. 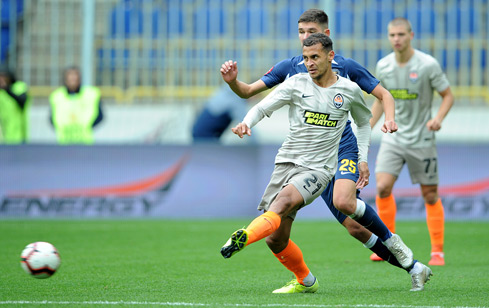 Alan Patrick made his 100th appearance for the club (in the last round, he scored his 10th goal). The Brazilian first appeared with the Miners 8 years ago, on September 21, 2011. In today's squad, only Pyatov, Stepanenko, Kryvtsov, and Dentinho had made their debuts earlier than he did. For several years, Patrick played for a few years on loan for Internacional, Palmeiras, and Flamengo, returning to Shakhtar in January 2017. The 2018/19 season was the busiest for him in terms of the number of appearances (38).

Taison made his 150th appearance for Shakhtar in the Ukrainian Championship. The captain celebrated his recent milestone appearance with a goal in the 83rd minute.

Junior goes down in history

Moraes scored in the 4th minute and this goal proved decisive in the game. For Junior, this is the 85th goal in the Premier League (Metalurh, Dynamo, Shakhtar). He is already in the top 10 scorers in the history of the Ukrainian Championship, having sidelined the former striker of Zorya and Chornomorets Timerlan Huseynov from the 9th position. The Shakhtar striker needs to score 6 more goals to get clear of Serhii Mizin and Marco Devic (90 goals each).

Who suffered from Moraes’ action?