August 10, Kyiv, NSC Olympiyskyi, 17:00 Live broadcast to be available on the 2+2 channel Before the match Shakhtar started their league campaign with victories over Oleksandriia (3-1) and Karpaty (3-0). In both games, Luis Castro’s men enjoyed possession of 70 to 75% and had an advantage in terms of key match figures. Now, the champions are facing an away game against their major title-race competitors - Dynamo Kyiv. The teams opened the new season with a Super Cup clash in Odesa. Shakhtar were in front after Patrick’s late first-half goal, conceding goals in the 80th and the 83rd minutes and suffering a frustrating defeat. In the upcoming game at the NSC Olympiyskyi, the Orange-and-Blacks have a good opportunity to take revenge. The Miners have been preparing for the Clasico for a week now. On Wednesday, they held a ninety-minute training session, including some playing exercises, set-play practice, and small-sided games. Opponents For Dynamo, this match will be the first home one this season. Oleksandr Khatskevych’s men kicked off their league campaign in Odesa, then had two games in a row in Lviv, after which they opened their European campaign in Belgium – they suffered a narrow defeat at the hands of Club Brugge in the first leg of the third qualifying round in the UEFA Champions League. In the Ukrainian Championship, Dynamo are doing well. The Kyiv-based outfit experienced no problems with Karpaty, scoring twice late in the first half (2-0), also netting three unanswered goals against Lviv last Saturday (Buyalskyi's late first-half brace and de Pena's goal after the break). In terms of the opponents’ personnel news, it is worth mentioning the return of the recovered Fran Sol, the gradually improving form of Viktor Tsyhankov, and the debut of newcomer Gerson Rodrigues. Head-to-head record In 61 games, Shakhtar claimed 20 victories, Dynamo had 24 wins, along with 17 draws. The Miners scored 70 goals and conceded 77 goals. Previous league meeting On May 22, Shakhtar hosted Dynamo in Kharkiv as the 12-time domestic champions. In the opening thirty minutes, Tsyhankov threatened Pyatov’s goal three times from different distances, and it was Viktor who put his team in front from the spot in the 36th minute. Toward the close of the first half, Kayode was running away from Shabanov, the defender fouled on the Nigerian and left the Kyiv outfit short-handed. Early in the second half, Tete completed the attack through the middle of the pitch involving Alan Patrick and the same Larry, making it 1-1. After sending off Khocholava, the teams got even again, with both sides having some scoring chances and with Shakhtar having an opportunity to snatch victory in the end but for Tete’s wide and high attempts. 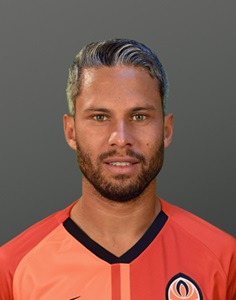