This winter, Shakhtar held two training camps in Turkey, including seven test games vs the opponents from Croatia, Azerbaijan, Denmark, Poland, Serbia, Bulgaria, and Austria. If a year earlier, Paulo Fonseca’s men had played vs Chornomorets before the Champions League game vs Roma, this time, the season kicks off with the European competition clash. Just the same thing happened in February 2017 vs Celta.

Yesterday, the Shakhtar manager Paulo Fonseca introduced the newcomers Valerii Bondarenko and Manor Solomon. The first one is still injured and will not be able to benefit the team, and the second one, on the contrary, managed to prove himself on the training camp and has a chance of making his debut with the Orange-and-Blacks in the competitive match.

After 21 rounds, Eintracht are sitting in the fifth spot in the Bundesliga, being five points adrift of RB Leipzig. This year, the Frankfurt side have not suffered any defeats yet: they defeated Freiburg 3-1 and drew with Werder Bremen (2-2), Borussia Dortmund (1-1) and RB Leipzig (0-0). The Serbian striker Luka Jovic tops the scorers race, boasting 14 goals.

While Shakhtar were on vacation and prepared to resume the season campaign on the training camp, the Eagles had seven competitive games. Reviewing the last 10 away games in all competitions, it is worth paying attention to the fact that Shakhtar’s opponents suffered only one defeat (at the hands of Hertha on December 8).

A lot has been said about Eintracht’s Europa League successes. Hutter’s men won all six group stage games, that is how they found themselves among the seeded sides in the round of 32 draw.

Adi Hutter uses a 3-4–1–2 formation. Martin Hinteregger, who was loaned from Augsburg before the transfer window closed, has got one of the defensive roles. In general, the starting line-up of the opponents is quite predictable, with the exception of midfield, with Rode’s availability being questionable; but there are other players available - De Guzman and Willems could well make a pairing with Fernandes.

Shakhtar and Eintracht met in the 1980/81 UEFA Cup round of 64. The Germans appeared for the match in Donetsk as the-then title holders and lost 0-1 (midway through the first half, Vitaliy Starukhin scored from the spot), still winning the return game (3-0, with Helzenbein netting an early one and the star Cha Bum-Kun grabbing a brace). 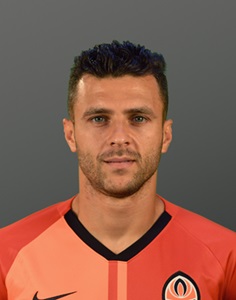