U21. Dynamo vs Shakhtar: preview

In the central match of the 18th round of the Ukrainian U21 league, Shakhtar will meet with their Dynamo Kyiv counterparts. We bring you the match preview

December 11, Kyiv, Lobanovsky Dynamo Stadium, 11:00 Live video on shakhtar.com
Before the match
In the standings, there is a three-point gap between the arch-rivals, so the meeting will answer the question of who is leaving for the winter break as the U21 league leaders. Dynamo have been leading currently (with 44 points and goal difference of 44-13). Shakhtar have 41 points, with Valeriy Kryventsov’s team being the most prolific in the league, having conceded the least goals (goal difference of 46-10).
In the previous round, the Pitmen claimed a home win over Stal (3-0). Oleksandr Mihunov opened the scoring as early as in the second minute, with Giorgi Arabidze and Yurii Hlushchuk sealing the win. For the Georgian midfielder this goal is the tenth this season making him level with the Orange-Blacks’ top scorer Mykyta Adamenko. Adamenko himself did not participate in the meeting with Kamenske-based side due to injury. He will not be able to help his teammates in the game against Dynamo either.
Besides, goalkeeper Vladyslav Trescheiko, as well as defenders Illya Ichuaidze and Dmytro Shevchenko have still been recovering. Midfielder Denys Arendaruk is back training with the team’s main group. No Pitmen will be missing the upcoming ‘Clasico’ for disciplinary reasons. 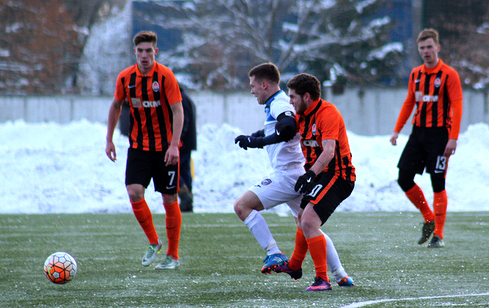 In the previous round, the Pitmen claimed a home win over Stal (3-0)
Referee – Kostiantyn Trukhanov (Kharkiv) Assistant referees – Oleksandr Korniyko (Myrhorod), Oleh Pluzhnyk (Kharkiv) Fourth official - Denys Shurman (Kyiv oblast) Referee observer – Serhiy Zadyran (Dnipro)
Opponents
Dynamo U21 led by the Spaniard Unai Melgosa have 14 wins, 2 draws and 1 defeat after 17 games this season. For the last time Kyiv lost points in the 11th round, suffering an away defeat at the hands of Chornomorets (1-3), then winning six games in a row. In the previous round, the White-and-Blues proved stronger than Vorskla (2-0). The visitors managed to score their first goal on 64 minutes (Serhiy Miakushko converted a spot kick), with Oleksii Schebetun doubling the lead in injury time.
The most prolific player of Dynamo this season is Serhiy Miakushko with 13 goals. 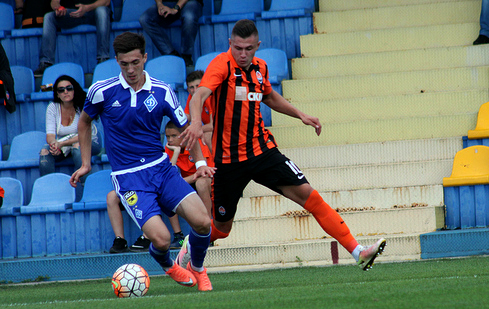