In the 17th round of the championship, the Pitmen will receive Kamenske-based Stal. We bring you the match preview

December 4, Lviv, Arena Lviv, 17:00 Live stream on Futbol 1 TV channel
Before the match
In midweek Shakhtar flew to Poltava, where the pitch condition did not allow them to play the Ukrainian Cup quarterfinal. On November 30, the team returned to Kyiv, and on December 1 they started preparing for the league game vs Stal.
By the 17th round of the Premier League, Srna, Malyshev and Bernard, who missed the game vs Dnipro due to suspension, are back with the team. By the way, after the 2-0 win in Dnipro, the number of goals in Shakhtar’s scoring run has exceeded one hundred.
The Orange-and-Blacks continue topping the league table, enjoying an eight-point lead over Dynamo. Already on December 12, Donetsk and Kyiv will conclude the calendar year with their meeting at the NSC Olympiyskyi. 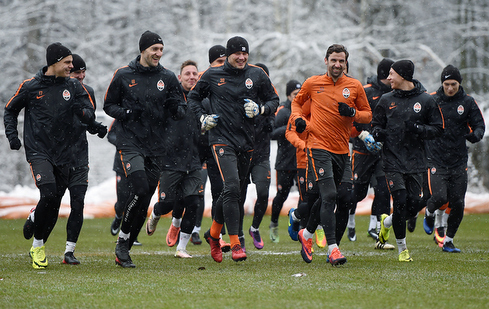 On December 1 the team started preparing for the league game vs Stal
Referee – Yuriy Hrysio (Lviv) Assistant referees – Yevhen Danylchenko (Luhansk), Mykola Levko (Chernivtsi) Fourth official – Oleksandr Holovkov (Luhansk Oblast) Referee observer – Mykhailo Ovchar (Ivano-Frankivsk Oblast)
Opponents
The charges of Joop Gall sit in the 8th spot in the table. At the moment, Stal are 8 points away from the top six teams. This said, before the winter break the Kamenske side are to meet with two participants in European club competition – Shakhtar and Zorya.
Stal’s top scorer in the current league edition is Komvalius (5 goals, including two spot kicks). The striker produced a goal-scoring run three games in the rounds 13 through 15, getting himself on the scoresheet vs Dnipro, Volyn and Dynamo.
Due to suspension the midfielder Maksym Zaderaka, who has taken part in every Premier League game of Stal since round 8, will miss the encounter with Shakhtar. 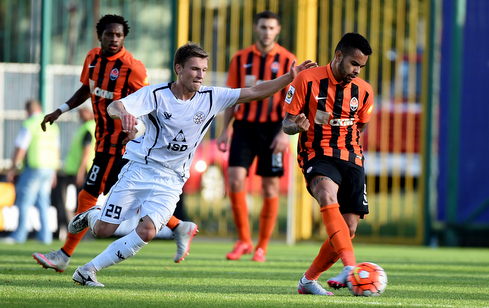 In the only home game, the Pitmen claimed a 2-0 win
Match background
The sides have had three domestic league meetings. Shakhtar boast two wins and one draw. The goal difference is 6-3.
In the only home game, the Pitmen claimed a 2-0 win.
Previous league meeting
In the 6th round, the Orange-and-Blacks got a narrow win in a tough encounter. The team of Paulo Fonseca were creating chances without netting any goals before the break. In the second half, Shakhtar's dominance was even more overwhelming. Ferreyra’s substitution appearance was effective: on 78 minutes, the Argentine produced a superb header to send a Srna pass home and give Shakhtar three points.
Interesting fact
The Pitmen launched their Premier League scoring run on August 28, 2015, which has been lasting for 36 games now (101 goals).