In the Europa League group stage round 3, the Orange-and-Blacks are to take on Gent, Belgium. We bring you the match background

October 20, Lviv, Arena Lviv, 20:00 Live broadcast on Ukraina and Futbol 1 TV channels
Before the match
Shakhtar are the sole leaders of the group H. The team of Paulo Fonseca claimed the maximum number of points without conceding a goal and going two points ahead of Gent.
After the game against Olimpik in Sumy, the Pitmen returned to Kyiv and were preparing for the Europa League in Sviatoshyno. This coming Wednesday, the Donetsk side will arrive in Lviv. On the evening of October 19, Paulo Fonseca and one of the players will meet with journalists, after which Shakhtar will have an open training session.
Referee – Anthony Taylor (ENG) Assistant referees – Stephen Child, Adam Nunn (ENG) Additional assistant referees – Lee Mason, Martin Atkinson (ENG) Fourth official – Harry Lennard (ENG)
Opponents
After ten Belgian League rounds, Gent are sitting in the fourth spot. The current standings situation is very competitive: the top side Anderlecht are only three points ahead of Gent.
Last weekend, Gent claimed a 3-0 home win at Zulte Waregem, with Kalifa Coulibaly, Moses Simon and Hannes Van der Bruggen getting themselves on the scoresheet. In general, since the first round of the Jupiler League, the Belgian side have had alternating wins and losses. Both defeats of Hein Vanhaezebrouck’s  team are away ones (0-1 losses to Oostende and Brugge).
Let us remind you that this recent summer, Gent were among Shakhtar’s opponents at a training camp in the Netherlands (the Pitmen won 2-0). However, Gent were represented by the reserve team with Bart van Renterghem at the helm. 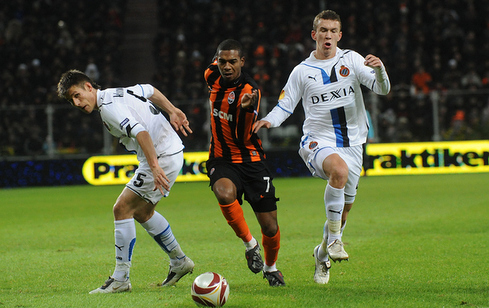