The Donetsk team players reflect on the game vs Oleksandriya

Taras Stepanenko, Shakhtar midfielder: - Today we had a tough meeting. Oleksandriya are quite viscous, paying great attention to defending. Even at 1-0 in our favour, they operated only on the counter. Only in the dying stages, they fielded their second tall striker, and they charged forward. So we found it tough in the closing minutes. Also in the match, the game structire has changed a bit, since the coach fielded many young players. Nevertheless, we won it and advanced further. As for my goal, I was somewhat lucky, because the ball hit the defender's back and off into the back of the net. However, I would like to mention a pass by Serhiy Kryvtsov. The opponent for the quarter-finals? Basically, it doesn’t matter who we get. If it’s Dynamo, so we’ll play Dynamo. Vyacheslav Tankovskyi, Shakhtar midfielder: - We fully controlled the first half. In the second half we managed to score another goal. In the end, the opponents produced an all-out attack. Oleksandriya have quite tall players, so they started sending lots of high balls into our penalty area. Yes, it was not easy in those moments. As for my debut, I wasn’t worried. The guys came up to me in the changing room and told me not to be nervous. I know what the Premier League is like, how to play at that level, because in the past I used to play for Zorya Luhansk. I think it was okay. After the match, the coach shook hands with me, saying that it was well done. 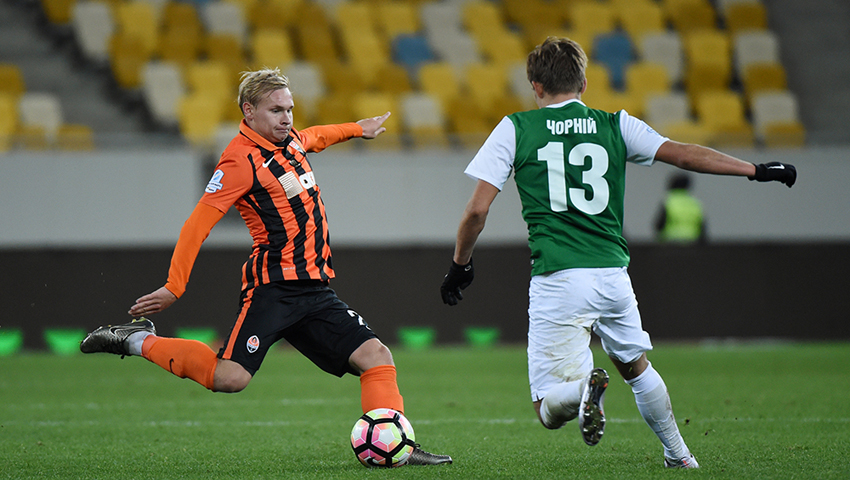 We fully controlled the first half. In the second half we managed to score another goal. In the end, the opponents produced an all-out attack
Marlos, Shakhtar midfielder: - It was an important match for us. We always try to defend the honour of Shakhtar and play to win only. I am happy that we managed to win today and make it further. In general, the guys did a great job in today's match. Especially, I liked the performance of Vyacheslav Tankovskyi. I think he was one of the best on the pitch and showed that, despite his young age, he is ready to play at that level. As for the match itself, we know how difficult it is to counteract the teams that spend most of their time defending. I believe that if we had scored the second goal, we would have gained the upper hand with a different result. In any case, the victory is important, and we have claimed it. Of course, it is not easy to play every three or four days, but we have enough players for reshuffling.