U21. Shakhtar vs Chornomorets: preview

In the 13th round of the U21 Ukrainian Championship, the Pitmen will entertain Chornomorets Odesa. We bring you the match preview

28 October, Schaslyve, Knyazha Arena stadium, 13:00
Before the match
Shakhtar are topping the league table, with 29 points scored in 12 games. The team of Valeriy Kryventsov has the best goal difference figures in the league: 35-7, with the scorers list being topped by Mykyta Adamenko (8 goals) and Andrii Boriachuk (7).
Both goalscorers missed the previous round game against Kropyvnytskyi-based Zirka, in which the Donetsk failed to score against the underdogs (0-0). Adamenko has recovered from illness, with all Shakhtar players preparing for the encounter with Chornomorets with the exception of the goalkeeper Vladyslav Trescheiko. Shakhtar have no suspended players.
Referee – Serhii Dankovskyi (Kyiv) Assistant referees – Yevhen Petrakov, Andrii Lytvyn (both from Kyiv) Fourth official – Klym Zabroda (Kyiv) Referee observer – Oleksandr Shamych (Kiev)
Opponents
Chornomorets U21 team kicked off the season with four defeats in a row, however, the Odesans have not suffered a single defeat after the matchday four. During this time, they managed to claim four wins, including the ones over Dnipro (2-1) and Dynamo (3-1), alongside four draws. Thus, the team of Henadiy Nyzhehorodov are sitting in the fifth spot in the league table with 16 points (goal difference: 16-12). The Sailors’ most prolific player is Mykhailo Popov, who scored three goals in 12 matches.
In the previous round, Chornomorets had a home draw vs Vorskla (0-0). Two minutes away from time, Vladyslav Schetynyn got a yellow card, which is his fourth this season, this fact will not allow the Chornomorets defender play against Shakhtar. 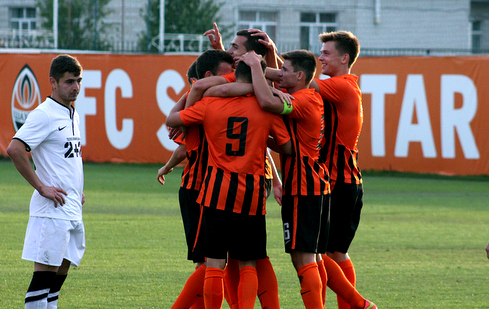