In the league’s round 13, the Pitmen will take on Chornomorets Odesa. We bring you the meeting background

October 29, Lviv, Arena Lviv, 17:00 Live broadcast on Futbol 2 TV channel Before the match Shakhtar kicked off the second half of the league season with a convincing win in Kropyvnytskyi, topping the league table and going 6 points clear of Zorya. For today, the Donetsk side are the most prolific league team. After the Ukrainian Cup Last 16 win, the Orange-and-Blacks held a morning training session in Vynnyky. Facundo Ferreyra trained individually. The Donetsk team have scheduled a session at the Arena Lviv. 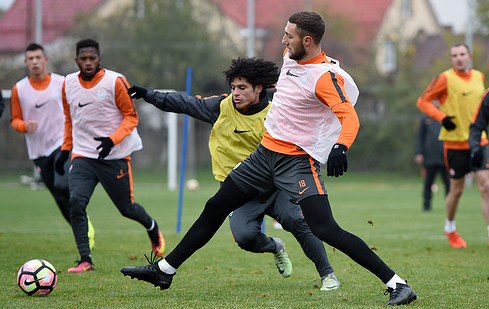 After the Ukrainian Cup Last 16 win, the Orange-and-Blacks held a morning training session in Vynnyky. Facundo Ferreyra trained individually. The Donetsk team have scheduled a session at the Arena Lviv
Yaroslav Rakitskyy will not be able to play vs Chornomorets due to his being suspended. Referee – Kostiantyn Trukhanov (Kharkiv) Assistant referees – Oleh Pluzhnyk (Kharkiv), Denys Shudryk (Simferopol) Fourth official – Yaroslav Kozyk (Mukacheve) Referee observer – Mykhailo Ovchar (Ivano-Frankivsk Oblast) Opponents Chornomorets close the top five sides in the league table. The team of Oleksandr Babich started with three defeats, dramatically improving their performance later. From the 4th to the 11th round, the Odessans never lost, thus making a big leap and catching up with the leading pack. Last weekend, in the home match against Vorskla, Chornomorets were initially ahead, but then concede a brace by Yuri Kolomoyets and suffered a defeat. The advantage over Poltava reduced to three points, with Olimpik just breathing down the Sailors’ necks. We want to point out that Chornomorets did not play in the middle of the week due to their being knocked out of the Ukrainian Cup at the Round of 32 stage. Match background The sides had 43 league meetings. With Shakhtar claiming 31 wins, another six games won by Chornomorets and six more ending in a draw. The goal difference is 86-26. The Pitmen claimed 18 home wins, twice losing to Chornomorets and once being tied. The goal difference is 49-6. Previous league meeting The matchday 2 game proved tough for the Orange-and-Blacks, despite the 4-1 scoreline. Before the break, no goals were scored. Shakhtar managed to make it only on 51 minutes, when Seleznov headed home a Rakitskyy shot. Shortly after that, Fred netted the second goal, with Chornomorets immediately responding with a goal by Filimonov. The narrow lead lasted until injury time, when Eduardo and Kovalenko sealed the win. 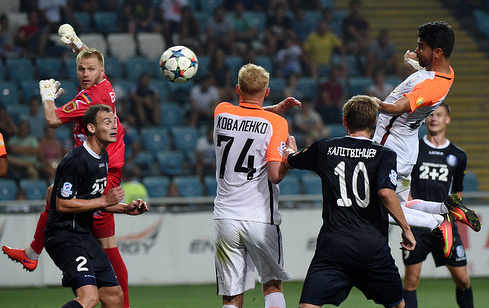 The narrow lead lasted until injury time, when Eduardo and Kovalenko sealed the win
Trivia The Pitmen kicked off their goal-scoring streak on August 28, 2015, amassing 32 games now (93 goals). The Orange-and-Blacks enjoyed wins and did not concede any goals in the seven recent home games vs Chornomorets. Andrei Pyatov needs to make another five apps to make it among Shakhtar’s top 10 players in the club’s entire history.