U21. Vorskla vs Shakhtar: preview

In the 8th round of the U21 Ukrainian League, the Pitmen are visiting Poltava-based Vorskla. We bring you the match preview

September 17, Poltava, Ltava stadium, 15:00
Before the match
Since the season start, Shakhtar have been confidently topping the U21 premiership, but in the last round they suffered a defeat. At present, the Orange-and-Blacks have 16 points, remaining the top scoring side in the league (the goal difference is 21-6).
In the upcoming meeting, the injured defenders Ilya Ichuaidze and Taras Kacharaba will not be able to help the team. At the same time, the season’s top scorer Mykyta Adamenko is back with the team. The charges of Valeriy Kryventsov still have no suspensions, with no players missing the game in Poltava due to suspensions.
Referee – Oleksandr Holovkov (Luhansk Oblast) Assistants – Oleksandr Kholodynskyi (Kharkiv oblast), Oleksandr Dashko (Kyiv Oblast) Fourth official – Denys Serdyuk (Poltava) Referee observer – Serhiy Lysenchuk (Kyiv)
Opponents
This season, Vorskla have not been quite consistent: the team’s winning streaks are followed by defeats, and after seven rounds they sit in the 6th spot in the table (with 10 points and the goal difference of 9-12). Last weekend, Poltava defeated Volyn (2-0) at home through the goals by Zarychniuk and Ostapenko. It was the first game since the beginning of the season, in which the charges of Oleksandr Omelchuk did not concede a goal.
Interestingly, Vorskla’s nine goals in the current league season were scored by eight different players, with Taras Sakiv boasting a brace. It should also be noted that the matches of Poltava U21 team frequently involve the experienced first-team performers (Oleh Barannik, Bohdan Shust, Oleh Holodyuk, Yevhen Zarichnyuk). 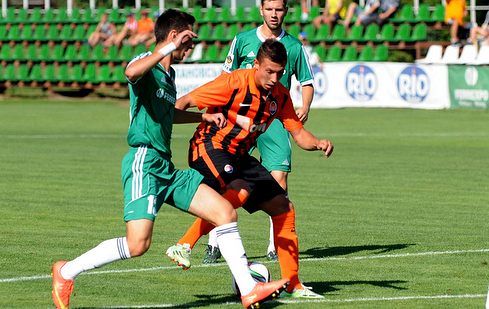