In the 8th round of the Ukrainian Premier League, the Pitmen will take on Vorskla in an away game. Here is the promo of the match

September 18, Poltava, Butovskyi Vorskla stadium, 7:30 pm Live broadcast on Futbol 1 TV channel
Before the match
On Thursday Shakhtar held the starting match of the Europa League group stage in Turkey. Paulo Fonseca's squad beat Konyaspor. Just two days later, Shakhtar has a local league match against the team from the top of the standings. The Orange-and-Blacks themselves occupy the top spot with 19 points gained in seven rounds.
Note that the captain of the Pitmen Darijo Srna, who had been injured in a game against Dynamo did not play with Konyaspor. Viacheslav Shevchuk and Yevhen Seleznov also missed the game in Turkey.
Referee – Ihor Paskhal (Kherson) Assistant referees – Natalia Rachinskaia (Kyiv), Yevhen Khalamendik (Kyiv) Fourth official – Oleksandr Holovkov (Luhansk Oblast) Referee observer – Serhii Zadiran (Dnipro)
Opponents
Before the 8th round Vorskla is 4th in the standings. Vasyl Sachko's squad are ahead of the closest Chornomorets due to goal difference. This season the Poltava team played very well at home, getting 8 points out of 12. However, the greatest result the team achieved in the 6th round beating Dynamo Kyiv on the latter's field (2-0 win with a brace by Yurii Kolomoiets). And at the previous weekend, Vorskla beat Volyn Lutsk 2-1. 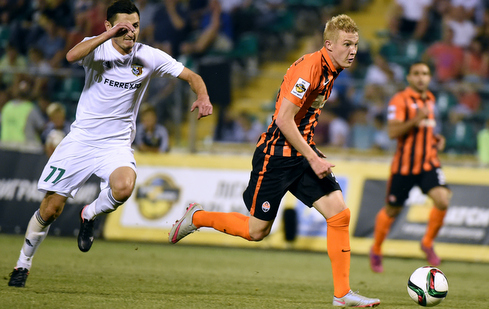