In the 2nd round of the Europa League group stage, Shakhtar will play against Braga, Portugal. We bring you the meeting preview

September 29, Lviv, Arena Lviv, 20:00 Live broadcast on Ukraina and Futbol 1 TV channels Before the match After defeating Konyaspor in the 1st round, Shakhtar have been topping the group H. Gent and Braga follow the leaders having one point each. For the Orange-and-Blacks, the two weeks between Europa League games passed without any losses in the domestic league. The Donetsk side beat Vorskla and Volyn, being five points ahead of the nearest rivals. Shakhtar have been preparing for the game at Sviatoshyn base. The major distinctive feature of the encounter is Paulo Fonseca’s former and current sides meeting. Shakhtar mentor points out that he is facing the outstanding match, still approaching Braga as regular opponents. Referee – Tobias Stieler (GER) Assistant referees – Jan Seidel, Rafael Foltyn (GER) Additional assistant referees – Robert Hartmann, Patrick Ittrich (GER) Fourth official – Mike Pickel (GER) Opponents Braga qualified for the Europa League group stage directly and started with a home draw vs Gent (1-1). In that meeting, the Armourers conceded a goal as early as on 6 minutes, responding with a goal by their centre-back Andre Pinto midway through the first half. This recent weekend, Braga claimed a 2-1 win against Setubal (with Alan converting a spot kick and Wilson Eduardo scoring a precision goal in the course of the game). After six rounds, the team of Jose Peseiro go fourth in the Portuguese league, being three points adrift of the leaders Benfica. Notably, it is the Eagles who have beaten Braga in both domestic games this season (the Super Cup and Primeira Liga one). Match background The teams met four times in European competitions (twice in the Champions League and twice in the Europa League). Shakhtar won on all four occasions. The goal difference is 11-1. The Pitmen won 2-0 and 4-0 at home. 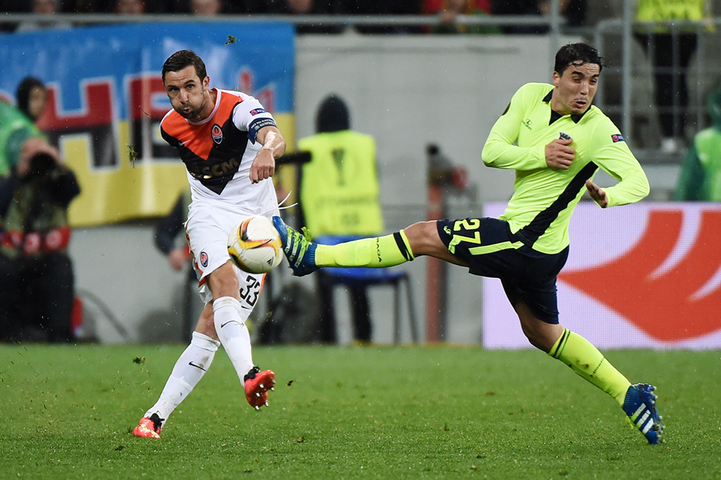