In the 7th round of the Ukrainian Premier League Shakhtar will take on Dynamo in Kharkiv. Here is a promo of the match

September 9, Kharkiv, OSC Metalist, 9 pm Live broadcast on Ukraina and Futbol 1 TV channels Before the match Shakhtar have six wins in six rounds and leads the standings. Dynamo's recent misfire allowed the Pitmen to solely head the standings. This fact guarantees the Orange-and-Blacks the hardest struggle and maximum mind-set of the opponents who will try to get a positive result and catch up. Note that the central match of the round will take place after a pause for the national team games. The outcome will greatly depend on how quickly the players of Shakhtar and Dynamo were able to recover and adjust to the training rhythm of their teams. Referee – Anatolii Abdula (Kharkiv) Assistant referees – Serhii Bekker (Kharkiv), Volodymyr Volodin (Kherson) Fourth official – Yurii Vaks (Khmelnitskyi) Referee observer – Ihor Pokydko (Poltava) Opponents Dynamo started confidently in the new season. In the 1st round Serhii Rebrov's squad defeated Oleksandriya 5-1. This was followed by more modest wins against Karpaty, Dnipro, Stal, and Volyn. The Kyiv team stumbled only in the 6th round, losing in a home game to Vorskla (after a brace by Yurii Kolomoiiets), and are now second in the standings. Match background The teams held 49 matches in the domestic league. Shakhtar has 17 wins, while Dynamo has 19. 13 games ended in a draw. Goal difference: 58-63 for the Kyiv team. The Pitmen were a home team in 24 matches (11 wins for Shakhtar, 8 draws, 5 losses). Goal difference: 33-23 for the Orange-and-Blacks. Another game was held with the Pitmen being nominal home team on neutral grounds, where they defeated Dynamo in the 'golden match' 2-1. 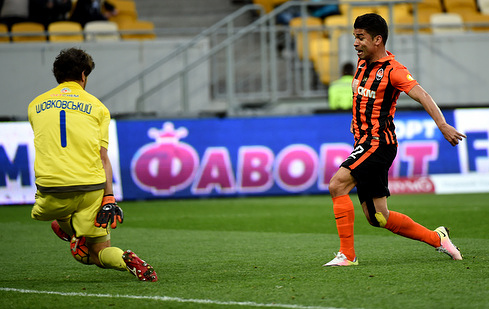