U21. Dynamo vs Shakhtar: match preview

In the 26th round of the Ukrainian U21 League, the Pitmen will lock horns with Dynamo away. We bring you the meeting preview

In the U21 league, the opponents have never allowed another team to claim the first and second spots this season, with both big sides only taking turns to top the standings. The opponents are heading into one of the season’s crucial match in the close fight for the title, with Dynamo currently being closer to winning the championship. Following 25 domestic league rounds, Dynamo earned 63 points displaying most effective attacking performance (with the goal difference of 63-17). Shakhtar come second with 58 points, however, they demonstrate the most reliable defensive performance and the best difference between the league goals scored and conceded (59-11).

The Pitmen went into the winter break three points adrift of the top team, but their failures in February and in March increased the gap behind the Kyiv side to eight points. They managed to remedy the situation thanks to a four-match winning streak: over Olimpik (1-0), Zorya (3-0), Chornomorets (4-0) and again at Olimpik in the second leg (3-0). So, in the last round, Valeriy Kryventsov's lads demonstrated that struggling until the very last seconds and believing in success will bring the result without fail: after barraging Olimpik with unceasing attacking moves throughout the entire match, Shakhtar broke the deadlock only in the 83rd minute (Denys Arendaruk put his name on the score sheet), with Danylo Sahutkin and Dmytro Topalov putting the seal on the final score with their injury-time goals. 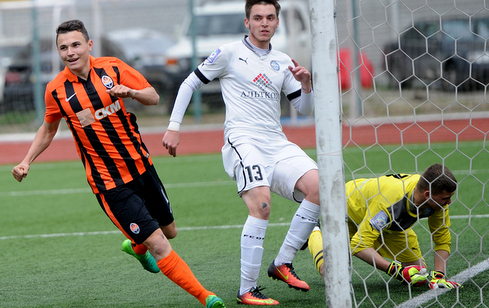 Shakhtar broke the deadlock only in the 83rd minute (Denys Arendaruk put his name on the score sheet), with Danylo Sahutkin and Dmytro Topalov putting the seal on the final score with their injury-time goals
It is crucial that the Pitmen managed to avoid injuries on the synthetic turf, so they are approaching U21 league Clasico with the optimal squad, as well as with no player serving a suspension. Referee – Yurii Mozharovskyi (Lviv)  Assistant referees  – Ruslan Yermolenko, Denys Marchenko (both - Chernihiv) Fourth official – Denys Shurman (Kyiv Oblast) Referee observer – Yurii Moseichuk (Chernivtsi) Opponents In 25 matches this season, the Kyiv side secured 20 victories, drew 3 times and lost 2 matches. They lost both games away: the team from the capital were beaten by Chornomorets in the season's autumn part (1-3) and suffered a loss to Karpaty during the spring part (1-2). However, the White-and-Blues secured confident wins in the last two league meetings – first, over Olimpik (5-0), and then over Zorya (2-0). Dynamo U21 player Serhii Miakushko is the most prolific player for now, topping this season’s top scorers list with 13 goals under his belt. Interestingly, the striker secured all his goals as early as in season’s autumn spell, with him currently playing on loan for Poltava-based Vorskla. Head-to-head This season, the opponents have already faced each other twice. They played the first round match on September 9, 2016 in Schaslyve. In the opening half, the teams exchanged goals: after an opener from the Donetsk captain Oleksandr Zubkov, Artem Besedin responded with a leveller. Immediately after the break, courtesy of Andrii Boriachuk’s effort, the Pitmen got ahead once again, however, failed to hold their lead. Zurab Ochigava and Volodymyr Shepelev sealed a 3-2 victory in favour of the Kyiv side. 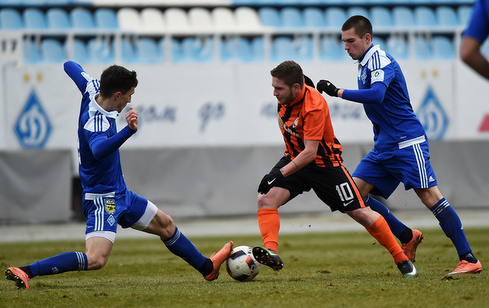 The second leg encounter took place at Dynamo’s V. Lobanovskyi stadium on December 11, 2016 and ended in a draw

The second leg encounter took place at Dynamo’s V. Lobanovskyi stadium on December 11, 2016 and ended in a draw. At the same time, Shakhtar were closer to winning and could wrest the victory in the dying minutes, but Oleksii Zinkevych failed to convert a spot-kick. As a result, it ended in a 0-0 draw.

Throughout the entire U21 league history, the rivals held 26 matches versus each other: Shakhtar have 7 wins to their account, 9 games rounded off with a draw, as Dynamo emerged victorious 10 times.

Shakhtar remain the only side that have not lost a single away match throughout this season: 9 wins and 4 draws. At the same time, Dynamo won 10 out of 11 home games and were held to a draw once in the meeting with the Pitmen.