In the central match of the 26th round of the Premier League, the Pitmen will play Dynamo Kyiv away. We bring you the meeting preview

April 21, Kyiv, NSC Olympiyskyi, 20:00 Live broadcast on 2+2 TV channel Before the match The Ukrainian Clasico postponed until Friday evening will open the next round of the second league stage. Last weekend, the Pitmen claimed a convincing 4-0 victory in the Donetsk derby vs Olimpik. Taison, Bernard, Viktor Kovalenko and Facundo Ferreyra got themselves on the scoresheet. On April 19, the Orange-and-Blacks hosted another training session in Vorzel. The session was based around practising tactical elements in the intra-team mini-tournament. The injured Ivan Ordets trained individually. The remaining players, except Kudryk who had joined the U21 team, Tankovskyi and Boriachuk, have been training in the general group. 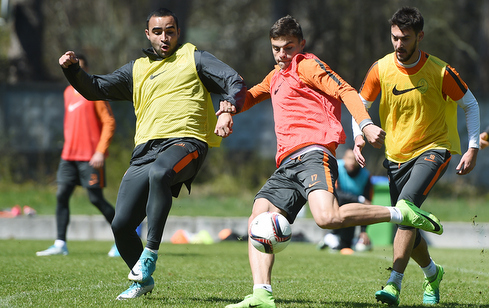 On April 19, the Orange-and-Blacks hosted another training session in Vorzel
Referee – Konstiantyn Trukhanov (Kharkiv) Assistant referees – Oleksandr Voityuk (Zaporizhya), Oleh Pluzhnyk (Kharkiv) Fourth official – Yurii Mozharovskyi (Lviv) Referee observer – Luciano Luci (Italy) Opponents Head-to-head meetings with Shakhtar during the second league stage are the major chance to compete for the league title for Dynamo. They are 11 points adrift of the Pitmen. After the setbacks in the first part of the season, the team of Serhii Rebrov have performed without losses so far through the changed tactics (they won in the last three rounds with an aggregate goal difference of 9-1). A week ago, the Kyiv side beat Zorya in Zaporozhya thanks to the only first-half goal by Denys Harmash. The outfit approach the encounter with Shakhtar in full, without having any suspended players. Only Yevhen Khacheridi and Valerii Fedorchuk are not preparing for the match. Match background The teams played 51 league games. Shakhtar have 18 wins, Dynamo have 19, with 14 more games ending in a draw. The goal difference is 67-63 in favour of the Kyiv side. Statistics on Dynamo’s pitch: 25 meetings, 14 wins by the hosts, 6 by the Pitmen, 5 draws. Goal difference is 42-27. Previous league meeting The Donetsk outfit were concluding the year 2016 with an away match against Dynamo. Just 13 seconds into the match, the hosts took the lead through a goal by Moraes, but the Pitmen’s response did not take long: Bernard's set play delivery was diverted by Khacheridi. After another half-hour of performance, Rybalka brought the Kyiv team in front again, with Fred equalising immediately after the break. Shortly afterwards, Ferreyra's goal tipped the scales in Shakhtar’s favour, with Khacheridi's own goal following Dentinho’s late cross just strengthening the Orange-and-Blacks’ advantage. The injury-time goal by Besedin did not affect the outcome – 4-3 in favour of the leading team.


Trivia The Pitmen’s goal streak in the league kicked off on August 28, 2015, lasting for 45 matches (120 goals). The teams of Paulo Fonseca and Serhii Rebrov will be meeting for the fourth time this season. Facundo Ferreyra has been leading the Premier League scoring race (10 goals), ahead of Andrii Yarmolenko and Gustavo Blanco Leschuk (9 each). Purchase season tickets for all home games of the Pitmen in the title race at the ticket office of OSC Metalist (from 9:00 until 20:00, no breaks) or on shakhtar.com.