U21. Shakhtar vs Karpaty: match preview

In the 27th round of the Ukrainian U21 league, the Pitmen will receive Karpaty. We bring you the meeting preview

April 29, Schaslyve, Kniazha Arena, 12:00 Before the match The rivalry between Shakhtar and Karpaty is one of the most interesting and unpredictable in the U21 league. Their neighbouring positions in the table also makes it more intriguing. The Pitmen, who have scored 58 points in 26 games (goal difference 59-13), remain in the second place. Though after the last round defeat, the gap between them and the top spot increased to eight points. The meeting with Karpaty will be missed by the Donetsk midfielder Denys Arendaruk and defender Danylo Sahutkin who have been suspended, with Mykyta Adamenko and Dmytro Shevchenko being injured. Referee – Maksym Kozyriatskyi (Zaporizhya) Assistant referees – Semen Shlonchak (Cherkasy), Volodymyr Shlanchak (Cherkasy Oblast) Fourth official – Artem Mikhailyuk (Kyiv) Referee observer – Serhii Zadyran (Dnipro) Opponents In 26 rounds this season, Karpaty won 15 games with 5 draws and 6 defeats. Thus, the Lviv U21 team scored 50 points (goal difference 39-28), currently sitting in the third spot in the table. It seems that they will not drop below the top three spots, however climbing higher will not be easy at all as they are eight points adrift of Shakhtar. Karpaty started the second league stage with a home victory over Dynamo (2-1), but they lost the next match to Zorya (1-2) and tied with Chornomorets (0-0). Last weekend, Lviv were entertaining Olimpik who also try to claim the third spot, and won this important duel 4-2. Karpaty’s top scorer this season is midfielder Ihor Bohach (6 goals). Match background Shakhtar and Karpaty met 22 times in the U21 league: 9 wins for the Pitmen, 8 for the Lviv side, also 5 draws. The goal difference is 44-32 in favour of the Orange-and-Blacks. 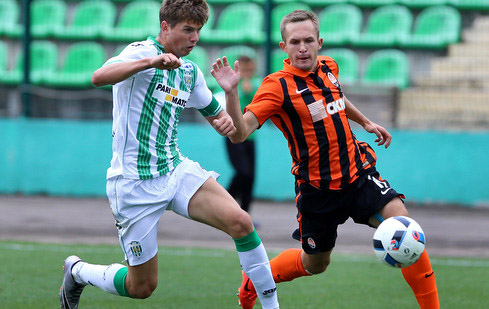