U21. Shakhtar vs Chornomorets: match preview

In the 24th round of the U21 league, Shakhtar will take on Odesa-based Chornomorets. We bring you the game preview

April 8, Schaslyve, Knyazha Arena, 12:00 Before the match The victory over Zorya, which the Pitmen claimed a week earlier, not only allowed to reduce the backlog from the league leaders, but also demonstrated the progress made by the team recently. This primarily concerns converting the scoring chances. In the game against Luhansk, Valeriy Kryventsov’s men again created many good opportunities near the opposing goal, but, unlike previous matches, they also managed to score some goals. The goals by Danylo Ihnatenko, Oleksandr Hlahola and Roman Yalovenko became a reflection of the huge advantage and confident performance of the Orange-and-Blacks. 3-0, being the Pitmen’s biggest win this spring. Currently in the standings, Shakhtar (with 52 points) are five points away from the top spot, being the best again according to their additional indicators: 52 goals scored and 11 goals conceded (+41). Valeriy Kryventsov's men prepare for the meeting vs Chornomorets in full, except for the injured Mykyta Adamenko and Dmytro Shevchenko. There are no suspended Pitmen. Referee – Vitalii Romanov (Dnipro) Assistant referees – Viktor Nizhnyk (Vinnytsia), Volodymyr Shlanchak (Cherkasy Oblast) Fourth official – Oleksandr Titov (Donetsk) Referee observer – Orest Shmyhelskyi (Lviv) Opponents Chornomorets started this season with four consecutive defeats, but then they produced an eight-match unbeaten run, including a home victory over Dynamo (3-1). Only Shakhtar managed to stop the Odesans, but the autumn extra points earned by the outfit of Henadii Nizhegorodov were enough for the team to make it to the top six. In the spring, the Sailors scored just four points in five meetings, losing at home to Olimpik (1-2). After 23 matches, Chornomorets U21 team have 7 wins, 6 draws and 10 defeats (27 points, goal difference of 30-28), and and everything they have to do is competing for the final fifth place against Zorya. In the duel with Shakhtar, the Odesa team's captain Vladyslav Khamelyuk will not be able to help the team due to a red card he earned in the previous game. Match background  In the framework of the U21 league and championship, the sides met 24 times: 14 wins by Shakhtar, six games ended in a draw, and four wins by Chornomorets. The goal difference is 49-31 in favour of the Orange-and-Blacks. Both matches in the current season were won by the Pitmen. In the first round they were stronger in Odesa – 2-1 (Arabidze, 28; Adamenko, 63 - Schetinin, 80). And then they confidently won in Schaslyve 3-0 (Kacharaba, 11; Adamenko, 49; Arabidze, 90+3, pen.) 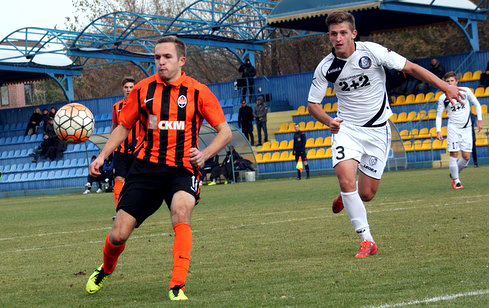 In the first round they were stronger in Odesa – 2-1 (Arabidze, 28; Adamenko, 63 - Schetinin, 80). And then they confidently won in Schaslyve 3-0 (Kacharaba, 11; Adamenko, 49; Arabidze, 90+3, pen.)
Trivia Shakhtar won 9 of the last 10 meetings against Chornomorets in the U21 league. Another duel ended in a draw. Giorgi Arabidze scored one goal in each of the three matches against Chornomorets U21.