U21. Shakhtar vs Mariupol: match preview

The Donbass derby will open the U21 league round 4: Shakhtar will take on Mariupol at home. We bring you the game preview

August 4, Schaslyve, Knyazha Arena, 16:30 Before the match The Miners continue topping the league table, having won all three starting matches with the aggregate goal difference of 10-2. After defeating Vorskla (3-1) and Dynamo (1-0), the team of Valeriy Kryventsov thrashed Stal away (6-1). The Donetsk team scored four goals within 10 minutes before the break (with Zubkov, Masalov and twice Hluschuk getting their names on the scoresheet), with the substitute players Yalovenko and Hlahola also scoring in the second half. During the week, there were no significant changes in Shakhtar line-up. The coaching staff still cannot count on Viktor Kornienko, although the defender has already started training individually. Murad Khachayev and Oleksii Zinkevych also suffered some minor injuries. The Orange-and-Blacks have no suspended players. Referee – Denys Shurman (Kyiv Oblast) Assistant referees – Valentyn Kutsev, Oleksandr Marchik (both from Kyiv) Fourth official – Volodymyr Novokhatnyi (Kyiv) Referee observer – Serhii Dzyuba (Kyiv) Opponents The team from Mariupol won the U19 championship in 2014, but in the recent two seasons they have not taken part in the U21 league. The young players practised playing for Illichivets-2 in the Second League. With the club's return to the UPL this summer, they have also ‘revived’ the reserve team, which was headed by the formerly renowned Shakhtar player and coach Ihor Leonov. Following the results of the three rounds, his boys have enjoyed an unbeaten run. After the opening draws with Veres (3-3 at home) and Zorya (1-1 away), the Azov side claimed their first victory, demolishing Chornomorets (4-0) away. The goals were notched up by Serhii Horbunov, Pavlo Vovk, Artur Avagimyan and Vyacheslav Kalinin. With 5 points under the belt, Mariupol sit in the 5th spot of the U21 league table. 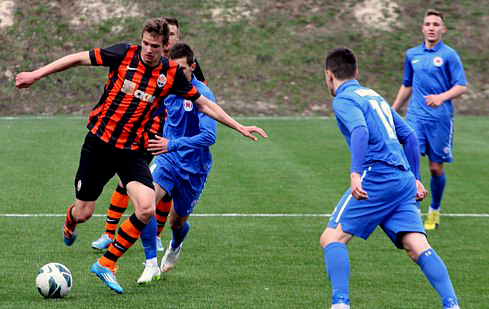