In the Europa League Round of 32 first leg, the Pitmen will play Celta away. We bring you the meeting preview

February 16, Vigo, Balaidos, 20:00 Live broadcast on Ukraina and Futbol 1 TV channels Before the match It will be Shakhtar’s first competitive game in 2017. Throughout the month, the Orange-and-Blacks exercised regularly and purposefully as part of their training camps in Spain and Portugal, also playing nine friendlies. In the autumn, the Pitmen proved to be the top team in the Europa League group stage, claiming the best result possible (six wins in six rounds). The secured top spot has allowed Paulo Fonseca’s men to feature among the seeded sides in the draw and play the knockout stage first game away. Shakhtar will go to Vigo on Wednesday, February 15. Shakhtar midfielder Taras Stepanenko will miss the upcoming meeting. Referee – Gediminas Mažeika (LTU) Assistant referees – Vytautas Šimkus (LTU), Vytenis Kazlauskas (LTU) Additional assistant referees – Jurij Paškovskij (LTU), Donatas Rumšas (LTU) Fourth official – Dovydas Sužiedėlis (LTU) Opponents Unlike Shakhtar, Celta did not interrupt their domestic performance this winter. In January, the team of Eduardo Berizzo knocked Valencia CF and Real Madrid out of the Copa del Rey, suffering a narrow win at the hands of Deportivo Alaves in the semi-final. The Sky-Blues have not suffered a single home defeat in La Liga this new year, having beaten Malaga (3-1) and Alaves (1-0). Another match in Vigo against Real Madrid was scheduled for February 5, but was postponed indefinitely because of the storm hitting Galicia. The damaged Balaidos stadium was repaired specifically for the meeting with Shakhtar. Celta’s last rehearsal before the Europa League was their Spanish league game vs Atletico Madrid. The Galicians twice enjoyed the lead owing to the goals by Cabral and Guidetti, still failing to retain the lead and losing 2-3. 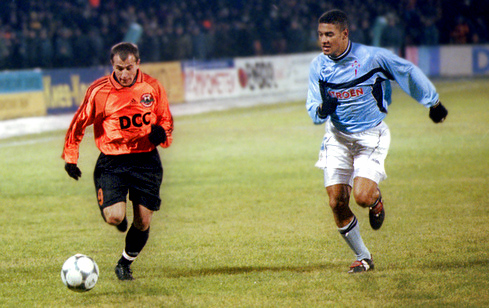