In the 19th round of the Ukrainian Championship, Shakhtar will face Poltava-based Vorskla in Kharkiv. We bring you the match preview

February 26, Kharkiv, OSC Metalist, 17:00 Live broadcast on Futbol 1 TV channel Before the match The Ukrainian Championship is resuming after a two-and-a-half-month break. Shakhtar secured a confident lead with 13 points ahead of Dynamo Kyiv. Paulo Fonseca’s men are the league’s most productive team, surpassing Vorskla more than twofold in the number of goals scored (41 vs 20). The Orange-and-Blacks are to hold their second match in Kharkiv in four days. Earlier this season, the Donetsk side have already taken on Dynamo and Karpaty at the OSC Metalist as part of the Premier League. Sunday's encounter Shakhtar vs Vorskla will draw to a close the round 19 match day. Referee - Dmytro Kutakov (Kyiv oblast) Assistants - Semen Shlonchak (Cherkasy), Andrii Skrypka (Kropyvnytskyi) Fourth official - Yurii Mozharovskyi (Lviv) Referee observer - Volodymyr Petrov (Kharkiv) Opponents On the eve of the match with Shakhtar, the Poltava club introduced their newcomers: goalkeeper Bohdan Sarnavskyi, defender Roman Kuniev, and midfielders Serhii Miakushko and Viacheslav Sharpar. At the end of 2016, 10 players left Vorskla, which led to a significant rejuvenation of the team. In winter, Vorskla held two busy training camps in Turkey to seal 3 wins and 4 draws out of 9 friendlies. The Poltava side finished sixth the autumn part of the Ukrainian Championship. Vorskla are set to vie for a spot in the top half of the league table for the regular season’s remaining rounds. Vasyl Sachko’s men are currently level on points with Odesa-based Chornomorets (23 points for either of them). Match background The sides held 41 domestic league fixtures. Pitmen have 30 wins to their name, with Vorskla gaining the upper hand twice, while another 9 encounters ended in a draw. Goal difference: 78-22 in favour of the Donetsk side. The Pitmen hosted 20 games: +17=3-0 45–9. 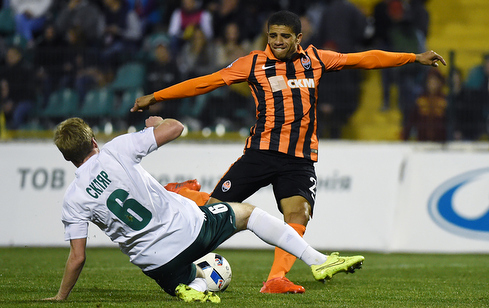