In the Ukrainian Super Cup decider, the Miners are to meet with Dynamo Kyiv. We bring you the meeting preview

July 15, Odesa, Chornomorets, 21:00 Live broadcast on Ukraina and Futbol 1 TV channels Before the match Last season, Shakhtar secured a golden double, so they will compete for the Super Cup against the domestic league’s second best side. Traditionally, this encounter will give start to the new football season. During the summer pre-season period, Shakhtar held a training camp in Germany, where they had five friendly games. Defender David Khocholava and midfielder Ivan Petryak have joined the team, as early as on Saturday they may wel debut for Shakhtar in competitive games. Upon returning to Ukraine, the team trained at the training base of Sviatoshyn. Referee – Kostiantyn Trukhanov (Kharkiv) Assistant referees – Oleksandr Voityuk (Zaporizhya), Serhii Bekker (Kharkiv) Fourth official – Anatolii Abdula (Kharkiv) Referee observer – Volodymyr Petrov (Kharkiv) Opponents The key summer change at Dynamo is Oleksandr Khatskevych as head coach. The Kyivans held a training camp in Austria, having six clubs as their opponents in friendly games. We also note that Oleh Gusev, Junior Moraes, Dmytro Khlebas, Artem Kravets and Dieumerci Mbokani are on the Dynamo roster this new season. Just after their return from the training camp, the White-and-Blues announced signing a Polish defender Tomasz Kedziora. Super Cup head-to-head record  The teams had 9 meetings and claimed two wins each in normal time. The goal difference is 11-11. Five meetings ended in a draw: the winners were determined in the penalty shoot-out, with the balance tipping in Dynamo’s favour 3-2. 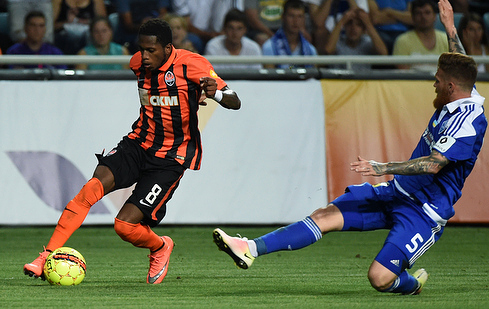