U21. Vorskla vs Shakhtar: match preview

Shakhtar are opening the new Ukrainian U21 League season with an away game vs Vorskla. We bring you the match preview

July 17, Poltava, Ltava stadium, 17:00 Before the match Last league’s silver medalists have significantly refreshed the team squad. The training camp in Schaslyve led by Valeriy Kryventsov has been attended by the players who played for Shakhtar U19 team last season. No deals have been signed with any of the numerous players attending the trials, but signings may still take place before the end of the transfer period. The Orange-and-Blacks approach the meeting with Vorskla in optimum form and in a good mood. In the last friendly before the season start, the Donetsk team defeated Cherkasy-based Dnipro representing the First League (1-0). Referee – Ivan Bondar (Kyiv) Assistant referees – Maksym Chos, Leonid Yarmolynskyi (both from Kyiv) Fourth official – Andrii Kovalenko (Poltava) Referee observer – Vitalii Hodulyan (Odesa) Opponents According to the 2016/17 season outcome, Vorskla finished 8th in the U21 league, ranking among the top three sides just two years ago. This said, the Poltava players showcased a habitually reliable defensive performance: only the leading duo conceded less goals. This summer, a number of changes were made in the white-and-green squad. According to the head coach Oleksandr Omelchuk, after returning from vacation, eight players conducted a training camp together with the first team, with four U19 players being tried for the reserve team. The U21 team played their most recent game vs PFC Sumy, beating the First League reps 3-1. Zosenko scored a goal and Sydorenko grabbed a brace for Poltava. 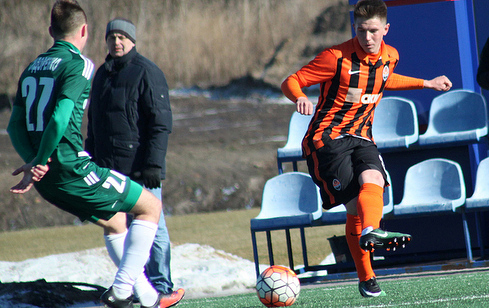