In the first Premier League round, Shakhtar will play Vorskla away. We bring you the match preview

July 18, Poltava, A. Butovskyi Vorskla stadium, 19:00 Live broadcast on Futbol 2 channel Before the match July 16 saw the start of another Ukrainian League season. Only the fixtures of Shakhtar and Dynamo, the participants in the Super Cup match, were postponed until Tuesday. Paulo Fonseca’s team kicked off the season with winning a trophy and preparing for the encounter with the Poltava side in a good mood. It should be noted that Vorskla at home are rather uncompromising opponents for Shakhtar. Over the past four seasons, the Green-and-Whites have twice taken away points from the leaders, so the first round is not expected to be just a walk in the park for the champions at all. Referee – Yaroslav Kozyk (Mukacheve) Assistant referees – Ihor Alyokhin (Khmelnytskyi), Semen Shlonchak (Cherkasy) Fourth official – Ivan Bondar (Kyiv) Referee observer – Viktor Shvetsov (Odesa)   Opponents Last season, Vorskla claimed the 7th spot in the first stage and competed among the second top six sides. As a result, the team of Vasyl Sachko retained their position, being one point clear of Stal, finishing the season with a goal difference of 32-32. In the summer, some changes were made in the team squad. After expiration of the loan agreements, Dmytro Khlebas, Serhii Myakushko and Oleh Barannyk left the team. At the same time, the team was joined by Mykola Matviienko, Vladyslav Kulach, Gegam Kadymyan and Andro Giorgadze, as well as Yurii Kolomoyets, who returned from Hungary. Head-to-head record The opponents held 42 league games. Shakhtar have 31 wins, Vorskla won twice, with 9 more games ending in a draw. The goal difference is 80-23 in favour of the Orange-and-Blacks. 21 games on the Poltava team’s field: +13= 6-2 33-13.   Previous league meeting On February 26, Shakhtar and Vorskla resumed their league performance after the winter break. Poltava successfully defended, taking the lead in the 27th minute: Khlebas lobbed  a Myakushko pass over Pyatov. Before the break, Fred and Blanco Leschuk made two attempts on goal. Midway through the second half, Kovalenko equalised, with the Donetsk team scoring the winner in the end: Ferreyra managed to finish off a Blanco Leschuk strike following a save by Shust – 2-1. 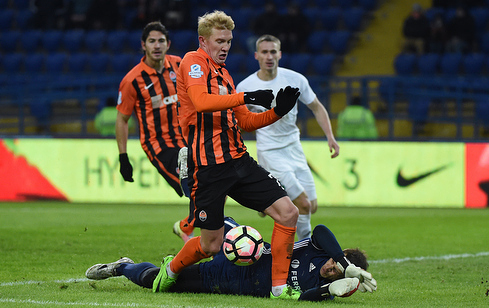 Midway through the second half, Kovalenko equalised
Interesting facts Shakhtar played 50 games with Paulo Fonseca at the helm. Shakhtar’s scoring streak in the Premier League kicked off on August 28, 2015 involving 52 games (132 goals).