U21. Shakhtar vs Dynamo: match preview

In the second round of U21 League, we will have the Ukrainian ‘El Clasico’ – Shakhtar will host Dynamo Kyiv. We bring you the match preview

July 22, Schaslyve, Knyazha Arena, 16:30 Live broadcast at shakhtar.com Before the match Both teams kicked off the new season with victories. The Miners claimed a confident 3-1 away win at Poltava-based Vorskla. The result was secured even before the break: Shakhtar U21 captain Oleksandr Pikhalyonok opened the scoring through a direct free-kick, with Yurii Hluschuk intercepting the ball in the opponents’ half to double the lead on 35 minutes. In the second half, the hosts remained short-handed, but managed to pull one back, with Oleksii Kaschuk still sealing the win with a spectacular goal into the top corner. By the way, the Shakhtar midfielder went down in history being the first footballer born in 2000 to have taken part in the U21 league game and scored a goal. In Poltava, Valeriy Kryventsov couldn’t count on a few key players, bringing in three more newcomers into the significantly rejuvenated Shakhtar squad: Yefym Konoplya, Volodymyr Yakimets and Murad Khachayev. Danylo Ihnatenko will return to the team by the meeting with Dynamo after suspension.  The participation of the recovering left-back Viktor Korniyenko is still unclear. Referee – Dmytro Bondarenko (Odesa) Assistant referees – Serhii Prystupa, Yevhen Petrakov (both from Kyiv) Fourth official – Volodymyr Novokhatnyi (Kyiv) Referee observer – Vadym Shevchenko (Kyiv Oblast) Opponents This summer, the Dynamo U21 team got a new coach. After being coached by Spanish specialists for a few years, the team was led by the Ukrainian coach Yurii Moroz who had previously worked with U19 team. In the opening match of the season, the Kyiv team, being reinforced by four first-team players (Kendzyor, Rybalka, Burda, Kravets), claimed a challenging win at Chornomorets (3-2). In the 78th minute the hosts were 0-2 down, but managed to level it and snatch three points. Denys Popov, Nazarii Rusin and Bohdan Lednyov scored for Dynamo. It is noteworthy that the comeback win happened after all the renowned performers were replaced and only the club’s young players remained on the field. 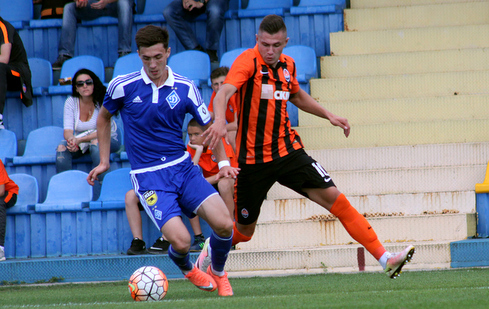