U21. Shakhtar vs Olimpik: match preview

In the 22nd round of the Ukrainian U21 league, the Pitmen will have a derby against Olimpik Donetsk. We bring you the match preview

March 16, Schaslyve, Knyazha Arena, 12:00
Before the match
Shakhtar remain in the second place in the U21 league table. To date, the Orange-and-Blacks have 14 wins, 4 draws and 3 defeats (46 points). At the same time, of all the league teams, they have been demonstrating the most secure defensive performance with 48 goals scored and only 11 conceded.
In the spring part of the league season, Valeriy Kryventsov’s men conceded only one goal. The Pitmen still cannot count on their two attacking spearheads: Andrii Boriachuk plays for the first team, while Mykyta Adamenko is injured. In this situation, the nominal midfielder Yurii Hluschuk, who is just getting used to his new position, has to play in the centre forward role. With Denys Arendaruk and Oleksandr Hlahola – who virtually did not appear in the first part of the season – playing as wingers.
It is worth noting that Shakhtar remain the most well-behaving team of the season, with nobody missing the upcoming meeting due to suspension.
Referee – Ihor Paskhal (Kherson) Assistant referees – Denys Marchenko, Ruslan Yermolenko (both from Chernihiv) Fourth official – Vladyslav Dorosh (Kyiv) Referee observer – Oleh Derevynskyi (Kyiv)
Opponents
Before the final round of the league season first stage, Olimpik have the fourth position in the table and have a theoretical chance of claiming the third spot. After the 21st match, the Donetsk side boast 10 wins, 8 draws and 3 defeats (38 points, goal difference is 37-26).
Ihor Klymovskyi’s men started the spring part of the season with a home draw against Stal (1-1), then losing to Dynamo (0-3), claiming a home win at Vorskla in the previous round (2-0). Poltava's top scorer Stanyslav Belenkyi, for whom this goal is the 11th in the current league season, allowed him to rise to the second line in the goal-scoring race, with the Georgian Luka Nadiradze netting one at the end of the match. Thus, the Pitmen’s unbeaten home streak has lasted six games. 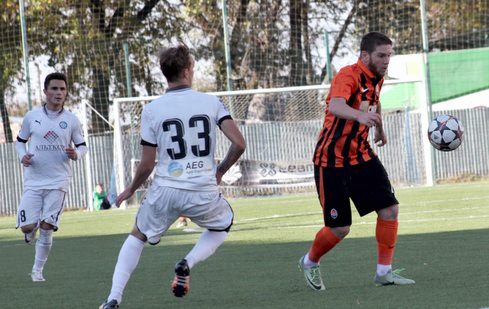