In the 22nd round of the Ukrainian Premier League, the Pitmen will play Olimpik in Kharkiv. We bring you the match preview

March 17, Kharkiv, OSC Metalist, 19:00 Live broadcast on Futbol 1 TV channel
Before the match
Last Sunday, the Orange-and-Blacks increased a gap between the runner-ups to 16 points. It is the final round of the league's first stage, after which the participants will be divided into two groups of six teams. Shakhtar and Olimpik will be among the top sides.
Two Donetsk-based clubs are to lock horns with each other for the sixth time in the Premier League. Interestingly, Olimpik is one of two sides, against which Paulo Fonseca’s men played out a draw in the first leg. The Pitmen expect a tough clash again in Kharkiv this Friday.
On March 15, before the Orange-and-Black held an open training session, the team’s head coach Paulo Fonseca and the skipper Darijo Srna had answered journalists' questions. Mykyta Shevchenko returned to the general group, with Dentinho still training individually. 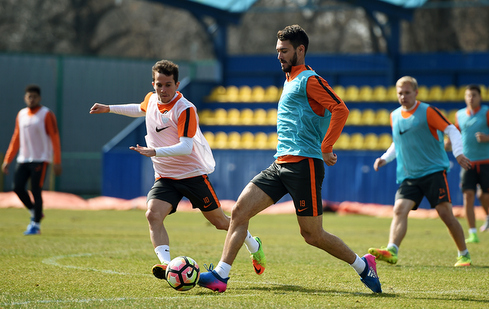 On March 15, the Orange-and-Black held an open training session
The referee of the match – Yevhen Aranovskyi (Kyiv) Assistant referees - Andrii Skrypka (Kropyvnytskyi), Oleksandr Korniiko (Myrhorod) Fourth official - Konstantyn Truhanov (Kharkiv) Referee observer - Volodymyr Petrov (Kharkiv)
Opponents
Olimpik currently hold the fifth spot in the league table; however, they are able to improve their standings. Presently, Roman Sanzhar’s guys are a point behind Oleksandriya, who are to play Stal on Saturday. On top of that, on March 26, the Donetsk side are supposed to hold the postponed round 17 fixture against Karpaty in Cherkasy.
Olimpik kicked off the season’s spring part with a goalless draw against Stal. Then the Pitmen’s opponents came near to stealing points from Dynamo. The crucial encounter in the competition race turned out to be the meeting with Vorskla, as, after conceding 2 goals, the Donetsk side turned the events around to make comeback and seal a 3-2 victory.
Head-to-head
The rivals played five times in the domestic league: the Pitmen came victorious 4 times, with another match ending in a draw. Goal difference is 18-3.
Previous league meeting
Last year on October 15, Olimpik stole points from Shakhtar in Sumy. The opening stages of the match passed in a high tempo, with the Orange-and-Blacks taking the upper hand; however, their advantage was not converted into goals. At the end of the first half, Kovalenko sent the ball into the net, but the referee ruled out a goal for offside. After the break, the time was right for Roman Sanzhar’s men to activate, but they missed two nice clear-cut efforts. The Pitmen continued to maintain pressure and saw Ordets putting his side in front in the 73rd minute, but soon after that, Matyazh scored an equalizer to make it 1-1. 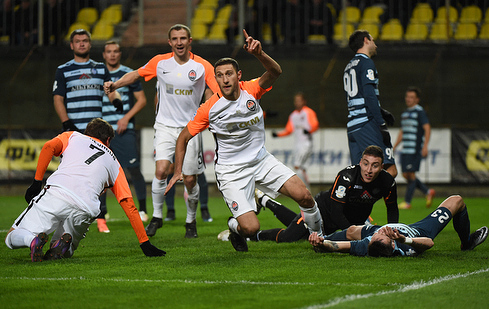 Ordets putting his side in front in the 73rd minute
Interesting Facts
The Pitmen’s scoring streak in the league started on August 28, 2015 and lasts 41 matches (112 goals).
Andriy Pyatov can make his 335th app for Shakhtar to claim the 8th spot in the guardsmen’ list throughout the entire club’s history.
The Orange-and-Blacks enjoy a winning streak of 10 games in the Premier League.
You can buy tickets for the game Shakhtar vs Olimpik at the OSC Metalist ticket office, online on shakhtar.com, on the club’s partner sites tickethunt.net, internet-bilet.ua, e-sport.in.ua as well as at retail outlets in Kharkiv.