In the Premier League round 20, the Pitmen will take on Volun Lutsk away. We bring you the match preview

5 March, Lutsk, Avanhard, 19:30 Live broadcast on 2+2 channel
Before the match
A week ago, Shakhtar and Dynamo simultaneously claimed 2-1 wins (against Vorskla and Zorya respectively). In this regard, the Pitmen’s advantage of 13 points compared to the closest chasers remains unchanged.
Meanwhile, there are three matchdays left before the end of the league season’s regular part. Let us remind you that there is a second stage under the new format: the teams will be divided into two groups according to the tournament standing with preservation of points. The top six clubs will continue to compete for the title and spot distribution in the European competitions.
Due to excessive yellow cards in the match against Volyn, Facundo Ferreyra is not participating.
Referee - Serhii Berezka (Kyiv Oblast) Assistant referees - Ihor Alyokhin (Khmelnytskyi), Oleksandr Korniyko (Myrhorod) Fourth official - Yaroslav Kozyk (Mukacheve) Referee observer - Yaroslav Hrysio (Lviv)
Opponents
Volyn had an unsuccessful start to the spring part of the league season, suffering a 0-6 defeat in Oleksandriya. The team of Vitalii Kvartsyanyi sit in the tenth spot in the standings, being ahead only of Dnipro and Karpaty who were taken points off in the course of the season.
However, there is no doubt that the opponents will be very motivated against Shakhtar at their own stadium. Volyn have claimed three wins this season (two in the league and one in the Cup), on Avanhard’s pitch.
Due to being suspended in the 19th round, Volyn striker Anatoliy Didenko will be missing the upcoming meeting.
Match background
The teams had 29 meetings in the league. Shakhtar have won 20 times, Volyn – 3 times, and 6 draws. The goal difference is 69-23.
The pitch in Lutsk hosted 14 games. The Orange-and-Blacks claimed 7 wins, Lutsk - 2, with 5 draws. The goal difference is 21-11 in favour of the Pitmen.
Previous league meeting
In the 9th round at the Arena Lviv, Shakhtar beat Volyn 3-0. The pressure on the opponents’ goal throughout the first half resulted in a cross by Butko and an own goal by Kychak. After the break, Ordets extended the lead for the Orange-and-Blacks, with Boriachuk spectacularly finding the back of the net with his backheel shot. 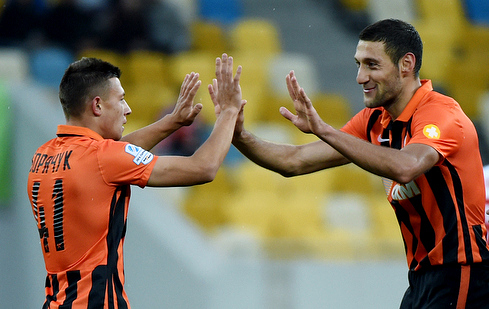 After the break, Ordets extended the lead for the Orange-and-Blacks, with Boriachuk spectacularly finding the back of the net with his backheel shot
Trivia
The Pitmen’s goal-scoring streak in the league kicked off on August 28, 2015, including 39 matches (109 goals).
Andriy Pyatov made 199 appearances for Shakhtar in the Premier League.
Ismaily may well make his 50th league appearance.
The Pitmen’s winning streak in the Premier League is 8 games.