U21. Chornomorets vs Shakhtar: match preview

In the 29th round of the U21 Championship, Shakhtar will meet with Chornomorets in Odesa. We bring you the match preview

May 12, Odesa, Lustdorf, 12:00 Before the match Before the completion of the U21 championship, the teams are to have four more games each. Shakhtar (64 points, goal difference of 62-13) sit in the second spot in the table, still being 8 points adrift of the top spot side. The Pitmen’s defence remains the most reliable in the league: for example, in the 10 spring meetings they allowed the opponents to win just on three occasions. In the previous round, the Donetsk team claimed a home win at Zorya (2-0). Andrii Boriachuk opened the scoring, with the goal becoming the ninth this season and the second one being netted by Danylo Ihnatenko. Before the encounter with Chornomorets, the Pitmen have no suspended players. Referee – Yevhen Aranovskyi (Kyiv) Assistant referees – Oleksandr Pavlinov, Dmytro Kozorezov (both from Odesa) The fourth official – Maksym Ponomarenko (Odesa) Referee observer – Vitalii Hodulyan (Odesa) Opponents Based on the results of the first league stage, Chornomorets joined the group of the strongest teams, bat did not manage to improve their standing: in the last 6 games they scored just 4 points, currently sitting in the sixth spot (35 points, goal difference 33-37). In the previous round, the Sailors were thrashed by Olimpik (1-4), conceding all goals in the first half. Match background In the U21 league, the opponents had 25 encounters: 15 wins for Shakhtar, 6 draws and four wins for Chornomorets. The goal difference is 53-31 in favour of the Orange-and-Blacks. 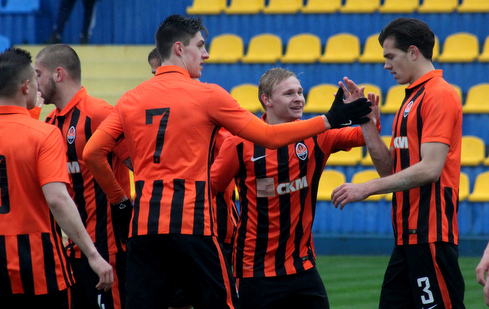