In the Premier League 29th round, the Pitmen will play Chornomorets in Odesa. We bring you the match preview

Shakhtar secured the title early and approach the coming match in a good mood. Head coach Paulo Fonseca repeatedly stressed: the lack of competitive motivation can guard down none of the players, since the Pitmen’s goal is winning every game. 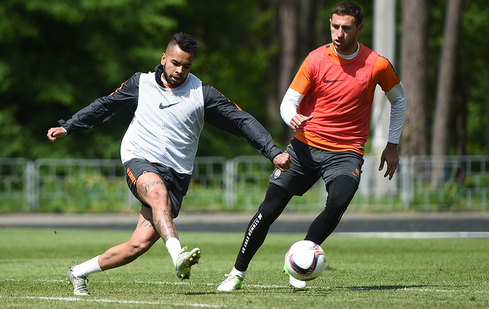 On May 11, the Donetsk side hold a morning training session at Sviatoshyn base

On May 11, the Donetsk side hold a morning training session at Sviatoshyn base. An additional incentive for the Orange-and-Blacks is their wish to take revenge for the April match versus Chornomorets in Kharkiv, where the Odesa outfit managed to swing the game in their favour and claimed a victory by the score of 2-1.

Shakhtar captain Darijo Srna is to miss the encounter through exceeding the limit of yellow cards.

After securing a win in the clash against the Pitmen, Oleksandr Babich’s men beat Oleksandriia (1-0) and Zorya (2-1). The Sailors’ winning streak was interrupted on April 30 in the clash against Dynamo (a 1-4 defeat), before Chornomorets lost minimally to Olimpik away in the previous round.

Odesa-based squad stay at the bottom of top six, having 37 points under their belt. Oleksandriia earned the same number of points, with Olimpik staying two points clear of them. The battle for places in the European competitions is well under way.

After seeing a red card in the clash against Olimpik, David Khocholava will serve a one-match ban for the next round.

The teams played out 45 league fixtures: the Pitmen added 32 wins to their account, as Chornomorets came victorious 7 times, with them registered 6 draws. The goal difference is 89-28.

22 matches took place on the Sailors’ home pitch: in 4 of them the hosts took the upper hand, as Shakhtar secured 13 wins, with 5 other meetings ending in a tie. The goal difference is 37-20 in favour of the Donetsk side. 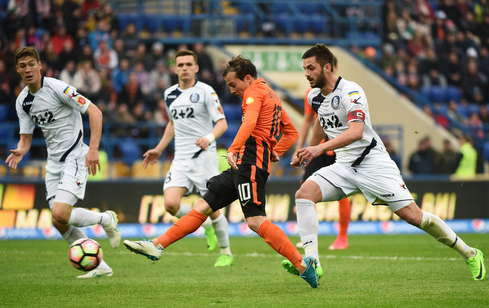 Srna moved to the midfield and sent a pass to Bernard, who played one-two with Blanco Leschuk before flicking a well-placed shot into the far corner

On April 9, the Orange-and-Blacks seized the initiative delivering set-play attacks to take the lead in the 27th minute. Srna moved to the midfield and sent a pass to Bernard, who played one-two with Blanco Leschuk before flicking a well-placed shot into the far corner. Chornomorets pulled one goal back before the break, thanks to a net-buster from Andriievskyi after Khoblenko teed up him the ball. In the second half of the game, the Odesa side managed to launch a successful counter-attack, which finished off with a goal from Elias - 1-2. In the closing stages, Shakhtar got on the front foot, however, Oleksandr Babich's men held on for a win.

The Donetsk side’s goal-scoring series in the domestic league kicked off on August 28, 2015 and lasts 48 matches (125 goals).

If Shakhtar emerge victorious in all the remaining rounds, they can set the he Ukrainian Premier League record by a number of points earned (87).

Taras Stepanenko made 198 apps for the Pitmen, as Viktor Kovalenko can register his 50th appearance in the Premier League.