In the 30th round of the Premier League, the Pitmen will lock horns with Olimpik. We bring you the meeting preview

May 21, Kyiv, V. Lobanovskyi Dynamo stadium, 17:00 Live broadcast on Futbol 1 TV channel Before the match Shakhtar accomplished two key objectives for the season by claiming a golden double. After the cup triumph, the Pitmen got a day off, and on May 19 they started preparing for the game vs Olimpik. Despite the lack of competitive motivation, the team of Paulo Fonseca is determined to approach the remaining three league matches responsibly and achieve the maximum result. Let us remind you that after the Donetsk derby the Orange-and-Blacks are facing another clash vs Dynamo. 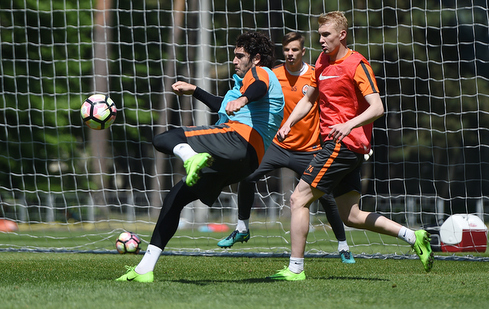 After the cup triumph, the Pitmen got a day off, and on May 19 they started preparing for the game vs Olimpik
Referee – Dmytro Kutakov (Kyiv Oblast) Assistant referees – Volodymyr Volodin (Kherson), Semen Shlonchak (Cherkasy) Fourth official – Ihor Paskhal (Kherson) Referee observer – Vitalii Hodulyan (Odesa) Opponents Three rounds before the Premier League second stage completion, Olimpik sit in the fourth spot. Roman Sanzhar's are 5 points adrift of Oleksandriya and Chornomorets, also being 3 points behind Zorya. The Donetsk outfit have not experienced the bitterness of defeats for three rounds now. After drawing with Zorya (1-1) in Kyiv, they scored 6 points in the home games vs Chornomorets (1-0) and Dynamo (2-1). Head-to-head record In the championship, the teams had 7 matches: 5 wins for Shakhtar plus 2 stalemates. The goal difference is 23-4. As the nominal hosts, the Orange-and-Blacks claimed two wins and drew once, having an aggregate goal difference of 10-1. Previous league meeting On April 15, the Pitmen managed to interrupt their stalemate run against Olimpik. Already in the 7th minute, Taison headed a Srna pass to bring the Pitmen in front, with Bernard doubling the lead towards the end of the first half. 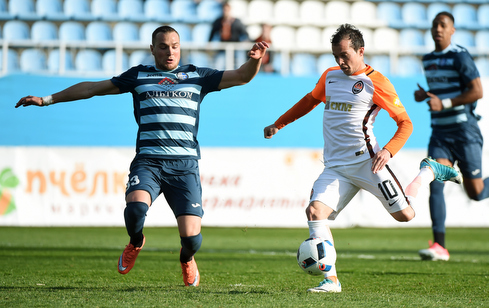 Bernard doubling the lead towards the end of the first half
In the second half, about 60 minutes into the game, the winners issue was finalised: Kovalenko and Ferreyra made it 4-0 from the penalty spot. Trivia The Orange-and-Blacks’ scoring run in the league started on August 28, 2015, lasting for 49 games now (128 goals). In case of claiming wins in all the remaining rounds, Shakhtar may set the Ukrainian League record in terms of the number of points scored (87). Taras Stepanenko is close to making his 200th appearance for Shakhtar (199). Facundo Ferreyra is the leader of the Premier League scoring race (13 goals).