U21. Shakhtar vs Zorya: match preview

In the 28th round of the youth championship Shakhtar will play Zorya. We bring you the match preview

May 5, Schaslyve, Kniazha Arena, 16:30 Before the match The Pitmen headed into the league’s final part coming second in the standings with 19 victories, 4 draws and 4 losses (61 points, goal difference: 60-13). In the last round, Valeriy Kryventsov’s lads claimed a 1-0 home victory over Lviv Karpaty who rank third in the league’s table. 19-year-old midfielder Dmytro Topalov secured a lone goal of the game. However, this victory did not change the situation in the premiership race, with the Donetsk side still lying 8 points behind the top team. One of Shakhtar reserve team’s top scorers Giorgi Arabidze will miss out the meeting with Zorya through exceeding the limit of yellow cards. However, Denys Arendaruk and Danylo Sahutkin returned to the squad after serving a suspension. Referee – Viktor Kopievskyi (Kropyvnytskyi) Assistant referees – Taras Klymenko, Oleksandr Marchyk (both - Kyiv) Fourth official – Oleksandr Titov (Donetsk) Referee observer – Serhii Lysenchuk (Kyiv) Opponents Following 27 rounds, Zorya come currently fifth in the youth league, having earned 35 points (goal difference: 32-39). In the last five fixtures, the Luhansk side alternate home defeats with away wins. So in the previous match, they secured a 3-1 victory away versus Olimpik. Shershen, Terzi and Belousov made their marks on the scoresheet. Zorya’s top scorer is Shakhtar’s Academy graduate Denys Bezborodko, who notched all his goals as early as in the autumn and currently plays for Luhansk first team. Match background The rivals have already met three times this season. In the first round, the Pitmen emerged victorious at home (2-0), before they were hold to a goalless draw in Zaporizhya this spring, as the last match ended with a lopsided away victory in favour of the Donetsk side (3-0). 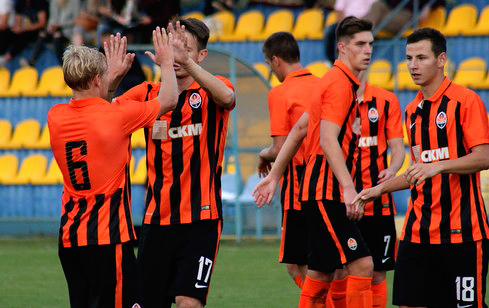