In the Premier League 28th round, the Pitmen will take on Zorya in Kharkiv. We bring you the game preview

May 6, Kharkiv, OSC Metalist, 17:00 Live broadcast on Futbol 2 TV channel Before the match The Donetsk side are going to play their third game in a row in Kharkiv following the cup semi-final versus Dnipro and the league match with Oleksandriia. Paulo Fonseca’s men enjoy the advantage of 14 points over the nearest chasers and are set up only to claim a win that can bring tenth title in the team’s history. 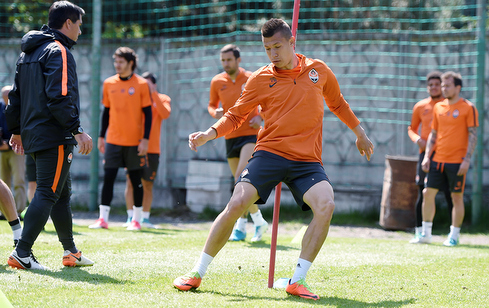 On May 4, the Orange-and-Blacks conducted an open training session in Vorzel
On May 4, the Orange-and-Blacks conducted an open training session in Vorzel. Before the session started, Paulo Fonseca, Yaroslav Rakits’kyy and Facundo Ferreyra answered the journalists' questions. Serving a suspension Dentinho and Viktor Kovalenko, which caught a cold, will miss out the clash vs Zorya. Referee – Yurii Mozharovskyi (Lviv) Assistant referees – Ihor Aliokhin (Khmelnytskyi), Andrii Skrypka (Kropyvnytskyi) Fourth official – Kostiantyn Truhanov (Kharkiv) Referee observer – Viktor Derdo (Chornomorsk) Opponents Zorya can become a bronze medallist of the domestic league for the first time in their history. Luhansk-based squad rank third in the league table with 5-point cushion above Oleksandriia. At the same time, Yurii Vernydub’s guys are going to face either of their direct competitors once again until the end of the season. Zorya have a winless streak in the second stage of Premier League so far. After the defeat from Shakhtar in the 23rd round, the Luhansk players drew with Oleksandriia, then lost to Dynamo and Chornomorets in Zaporizhya. Last weekend, after taking the lead in the clash with Olimpik, the Pitmen’s opponents conceded an equalizer with 15 minutes remaining to add only one point to their account. Due to a suspension, Artem Hordienko is to miss out the upcoming match. Injured Viacheslav Checher and Zeljko Ljubenovic apparently will not help their team. At the same time, Rafael Forster, Vladyslav Kalitvintsev and Ihor Kharatin, who picked up an injury in the game with Olimpik, must recover. Match background The teams played 31 matches in the Ukrainian Premier League. Shakhtar have the advantage: 27 wins versus 4 losses. The goal difference: 82-17. The Orange-and-Blacks emerged victorious in 12 home fixtures out of 15. The goal difference: 35-8. Previous league meeting On April 2, Shakhtar kicked off the Premier League second stage with an away game against Zorya. After the half an hour mark, Dennis Bonaventure capitalized on the Donetsk side’s defence error and did not miss his chance. 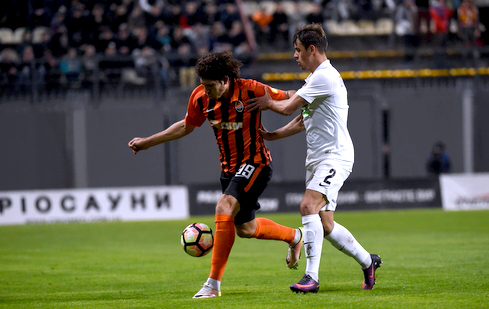