The games will take place on February 14 and February 21. The Miners will play the first leg at home.

Eintracht football club is based in Frankfurt am Main, one of the largest cities in Germany and the continent’s financial capital, where the headquarters of the European Central Bank is located. It also has the largest airport in the country - one of Europe’s major hubs ranking among the leaders in terms of freight-forwarding and passenger throughput.

The history of Eintracht dates back to 1899, but its history does not boast many great achievements. The team became the champions of Germany in 1959, before the creation of the Bundesliga. A year later, the Frankfurt outfit reached the European Cup final, suffering a crushing defeat (3-7) at the hands of the great Real Madrid of Di Stefano and Puskas.

Eintracht won the German Cup five times, being the current trophy holders (1974, 1975, 1981, 1988, 2018). In May, the Eagles defeated Bayern Munich in the final, with their manager Niko Kovac taking charge of the Munich team at the end of the season. He was replaced by the 48-year-old Austrian Adi Hutter. 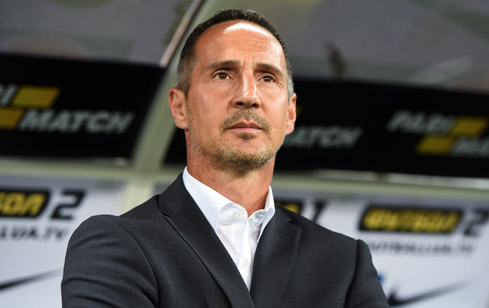 Eintracht manager Adi Hutter
The interesting facts do not end there. In 1980, Eintracht triumphantly claimed the only European club competition title by winning the UEFA Cup. The following season, as the reigning holders, they met with Shakhtar in the Round of 64. The Miners claimed a home win thanks to Vitaliy Starukhin's precision spot kick, which he earned himself, but the outcome of the return leg allowed the Germans to advance further. In the winter of 2014, the opponents locked horns again: in the first friendly on the training camp in the UAE, the Orange-and-Blacks secured a 1-0 win (Alex Teixeira scored a goal).

Eintracht delivered a superb group stage performance in the current Europa League, winning all their group games vs Lazio, Marseille and Apollon. The Frankfurt outfit scored 17 goals and conceded only 5. In the Bundesliga, Hutter's men are sitting in the fifth spot. The team’s attacking leaders are the Serb Luka Jovic (15 goals in all competitions) and the Frenchman Sebastien Haller (12 goals and 9 assists).