The best project in Europe

The Come On, Let’s Play! is Europe’s best CSR initiative in 2019

Barcelona hosted the 13th European Football for Development Network (EFDN) conference. In the course of the More than Football Award 2019 competition, they picked the best CSR project in Europe. About 40 continental clubs have taken part in it, with Chelsea, Juventus, Rangers, and Shakhtar being shortlisted as the last-four best competitors.

Finally, at Camp Nou on November 19, they recognised Shakhtar Social’s Come On, Let’s Play! project that is implemented jointly with DTEK and supported by the UEFA Foundation for Children, as the best one. Boys and girls aged 7 to 12 play football for free with coaches at 66 grounds in 33 locations in Ukraine. By 2019, a total of about 4,500 children have been involved in the project. 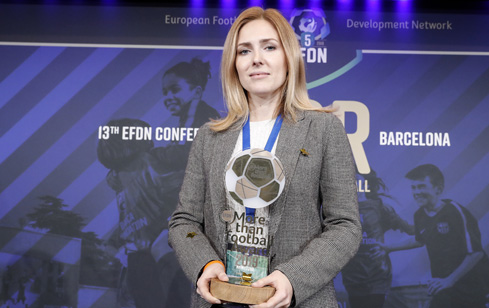 Shakhtar Social Director Inna Khmyzova: “We feel very honoured to receive the More than Football award. This is not only recognition but also a great motivation to continue implementing the Come On, Let’s Play! and other social initiatives”
For FC Shakhtar, this victory is the second in the club’s history. In 2012, the Say No To Orphanhood! project was awarded as the best social project in Europe according to the European Club Association (ECA).

The #Morethanfootball Action Weeks give clubs an opportunity to provide the wider European football family with a platform to inform about their CSR activities and raise awareness of the transformative role European club football can play in changing peoples’ lives for the better. The Morethanfootball Action Weeks participating organisations present their CSR initiatives on the national and international levels.