Playing for first team is great incentive for young players

The Donetsk native Valeriy Rudakov started attending the Shakhtar school at age 11, making his first-team debut as early as 1974. Being a central defender and a defensive midfielder, he spent 14 seasons with Shakhtar and made 341 competitive appearances (9 goals). He was a key player of the team who twice won the USSR Cup (1980, 1983), raised the Season Cup (1984), won silver (1979) and bronze (1978) medals in the USSR Championship. 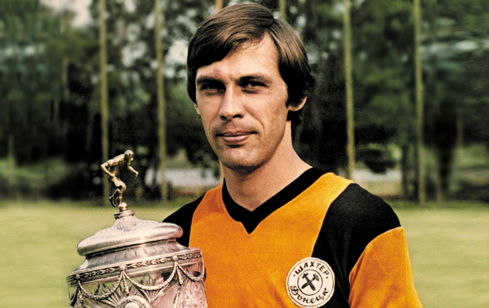 Valeriy Rudakov is a key player of the team who twice won the USSR Cup (1980, 1983), raised the Season Cup (1984), won silver (1979) and bronze (1978) medals in the USSR Championship
At the end of his career, Valeriy Rudakov was a member of Shakhtar’s coaching staff and headed the team in the 1995/96 season (38 games). For more than 20 years he has been working at the Shakhtar Academy, having brought up many generations of talented footballers for the club. At present, he is the coordinating coach of teams of all ages.

- Happy Birthday, Valeriy! We wish you good health and inexhaustible energy, new victories and all the best. Please tell us about your mood while marking the birthday?
- Thank you for your wishes on the occasion! The mood is great, but I really miss my favourite occupation which is football. We miss the guys, worrying that they don’t have any training sessions and matches. But their safety is paramount. That’s why all the Shakhtar Academy players are staying at home, training based on personal plans, keeping fit and looking forward to the return of a full-fledged football life.

- A year ago, the Shakhtar Academy teams won four sets of gold medals, and this season they have been leaders across all six age groups. Could you repeat or surpass this achievement?
- I think so, they could. There were all prerequisites for a very successful season: Shakhtar U19 and Shakhtar U21 were the leaders at the time of league suspension, in DUFL we also have very strong teams which are traditionally the major title challengers. We all at the Academy were tuned for the maximum result: the training process was very well organised, with a wonderful atmosphere present in the team. We can say we lived in anticipation of victories. And the guys themselves didn’t have enough time to fully prove themselves. But nothing depends on us in this situation. The youngsters’ health is the most important thing. Therefore, we can understand the decision of football officials to stop the children-and-youth competitions early.

- Nevertheless, the Premier League season continues, and Shakhtar have already secured the title. What’s your impression of the current Championship?
- There are some teams of a decent level. Besides Shakhtar and Dynamo, I would mention Zorya, Desna have surprised me with top-quality football, Kolos try to correspond to the top-flight standards. And Shakhtar’s early championship came as no surprise to me. Our team are strong and stable, the club has developed a clear system that operates well and brings results. I couldn’t expect such a big lead on points, but the Miners’ advantage has been significant throughout the season.

- During the season, Luis Castro actively involved the young players, and they will probably get more time in the remaining matches. You, as a player, made your first-team debut at the age of 19, as a coach you developed many talents. Tell me, please, how important it is for young people to feel the coach’s trust?
- This support of the coaching staff cannot be overestimated. When you work, try hard and finally get this chance - it inspires you very much. Playing for the first team is a great incentive for young players. They quickly gain experience, confidence, they grow as professionals. It’s good that Luis Castro gives young guys the opportunity to prove themselves. We see that even now Anatolii Trubin and Valerii Bondar are ready to compete for a place in the first-team squad, that Artem Bondarenko steps it up and tries hard after joining the first team just recently. There are also other footballers both in the reserve team and in the youth team. They need to work, train, adopt the playing system and the philosophy of the senior team, and, when the time comes, to use their chance. Everything depends on the players themselves.