We have the utmost respect for Shakhtar

About expectations from the game

– It's very important to score 9 points and we're well prepared to do that. We didn’t have our best game on Sunday. We strive to show our football and other identity. We have the utmost respect for Shakhtar. As you know, Courtois dropped out, but Modric and Lucas Vazquez are back. Ceballos had problems with the hamstring, and we're not counting on him tomorrow.

About the difference between the Champions League and the Spanish Championship

– I always want to win in the Champions League. La Liga is important, but the Champions League is the most important competition. These are completely different tournaments. One has 38 games, the other has a fewer number of them. Sometimes everything is settled within a 180-minute confrontation. And here the details are important. It's not about success or failure. Sometimes talk of success covers up your team's problems or opponent's preferences. If I say we were unlucky with Osasuna, then I hide our problems in ball possession and the good play of the opponent. It is important to pay attention to small details. In the Champions League, you can score three goals in just a few minutes, as happened to me. This can happen in the semifinals. A strong mentality gives control over small details. And Real Madrid is a team that cares more about these details than others.

– We have doubts about the next match with Getafe, but he may be back for a return match with Shakhtar or the Clásico with Barcelona.

– This is a team that has a lot of everyday problems, like in the training process, travelling. They got off to a great start in the Champions League, their style is similar to last year's – the team wants to play upright. They have very fast and dangerous forwards in counterattacks. We have great respect for Shakhtar. 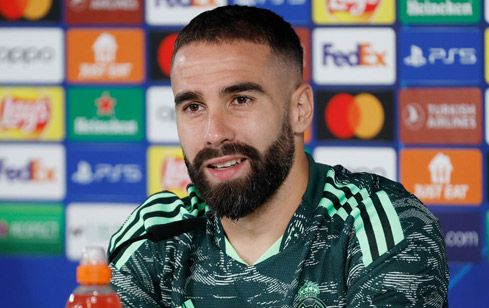 About Real Madrid's experience in the Champions League

– I am very lucky to have won five Champions League trophies. The key is in our mentality. The right values teach you to always win and fight. We know how difficult it is to win this tournament. I don't think anyone doesn't count us as one of the title contenders.

About the difficult situation of Shakhtar

– It is a pity that they found themselves in such a situation, concerning what is happening in their country. It's nice to see Shakhtar compete with four points so far – maybe it helps their fans a little bit to escape reality.

About the physical condition of the team

– Personally, I feel great. I try to get the best physical shape. We have a World Cup in six or seven weeks and we aim to come at the best time of the year. We take into account the draw against Osasuna in a difficult game. However, this is the past. Tomorrow will be a difficult game against the second team of the group. This confrontation will be the key to securing the first place.