September 15, Tiraspol, Sheriff Stadion, 19:45 Match build-up For the 16th time in their history, Shakhtar will start their Champions League group stage campaign. Interestingly, over the past six years, the Miners have faced Real Madrid twice in the 1st round (in 2015 and 2020), and this season Madrid have also become one of our rivals, but this time the Orange-Blacks begin their campaign with a trip to Tiraspol. Roberto De Zerbi's team held an open training session on Tuesday morning and flew to Moldova in the afternoon. Trubin, Kryvtsov, Solomon, Konoplyanka and Dentinho will definitely not take part in the match against Sheriff. There are 24 players on the list: goalkeepers: Shevchenko, Puzankov, Pyatov; defenders: Dodo, Vitao, Marlon, Matviienko, Konoplia, Ismaily, Korniienko, Bondar; midfielders: Stepanenko, Maycon, Marcos Antonio, Marlos, Tete, Bondarenko, Mudryk, Alan Patrick, Sudakov, Pedrinho; forwards: Traore, Sikan, Fernando. Let us remind you that Shakhtar had to make it through two qualifying rounds to get into the group stage this year. The first opponents were Belgium’s Genk who were beaten in both legs with the score of 2-1. The play-off round revealed an even more difficult tie against Monaco: after the 1-0 away victory, the Miners lost 0-2 in the return leg, but showed character and snatched the desired result. Thanks to a goal by Marlos, the game went into extra time, with an effective attack with the participation of Stepanenko, Fernando and Mudryk ending in a defender’s own goal that made it 2-2. Opponents Sheriff will make their debut in the main round of the Champions League. Over the 24-year history, the Tiraspol-baased club has achieved every success at the national level: they stopped the hegemony of the capital-based Zimbru (who won the league title eight times during the years of Moldova's independence) and became the most decorated club in the country with a margin of 19 wins now. Quite naturally, at the international level, the Tiraspol team started every season but dropped out of the qualifying stages often. Previously, Sheriff played four times in the Europa League group stage (2009, 2010, 2013, 2017). The Yellow-Blacks made their way to the Champions League for the first time under the leadership of a Ukrainian coach Yurii Vernydub who has been working with the team for less than a year (since December 2020). The outfit paved their way to the historic achievement through four qualifying rounds by defeating Albania’s Teuta (4-0, 1-0), Armenia’s Alashkert (1-0, 3-1), Serbia’s Crvena Zvezda (1-1, 1-0) and Croatia’s Dinamo (3-0, 0-0). The Moldovan league table is not indicative today: the leaders are Milsami and Petrocub – they have had three games more than Sheriff. Our opponents’ games were postponed precisely because of their tight schedule with the above qualifying rounds taken into account. Nevertheless, Vernydub's men have had five matches domestically: at first they lost to the top-flight debutants (FC Balti headed by another Ukrainian Ihor Rakhaev), and then claimed four victories, scoring a total of 14 goals against their opponents and conceding just two goals. Head-to-head record In the 2003/04 season, the clubs met in the second qualifying round of the Champions League. Back then, the first leg in Tiraspol ended in a goalless draw, and in the return game in Donetsk, Bernd Schuster’s side won 2-0 (through the second-half goals by Zvonimir Vukic and Brandao). 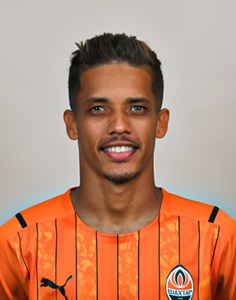